Okay, I know why the dwarfs in this short are merry – they are all drunk! Seriously, The Merry Dwarfs is one long ode to the joy of beer. If I drank like the dwarfs here, I’d be pretty darn happy all the time.

That aside, the rest of the short is entertaining, but mostly unremarkable. It opens with a nice scene, that features a great deal of depth, showing the dwarf village, with the dwarfs engaged in some dancing and working all at the same time. It’s interesting because it shows the cast in full before then zeroing in for some slice of life pieces. 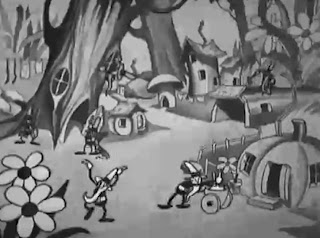 The small vignettes showing the various dwarf craftsmen and workers was my favorite part of the short. We start with a street sweeper, who ends up using his beard as a broom, then over to a shoemaker (cliché, isn’t it) and finally a trio of blacksmiths. All the little pictures of life in the dwarf world are good, because it does what I think animation can do best – give us an entry into a world that we can’t see anywhere else. 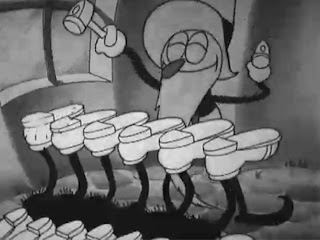 After that beginning segment, though, the short evolves into another all dancing short, with the patented Ub Iwerks’ silly dancing scenes. First, though, everyone has to stop for some beer, then they dance. A whole parade leads the beer into a field where four dwarfs get to drink, then start dancing. 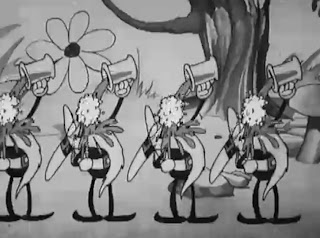 The four drop down to two, and they go through several different iterations, including using a leaf as a skirt, pulling their hats down over their entire bodies and a few more. The most inventive piece comes at the end, after the two dwarfs fall into a barrel of beer. As they continues dancing after getting out of the barrel, the entire background starts swaying in waves, and the dwarfs stay on the ground dancing. That experimental look alone makes this short notable. 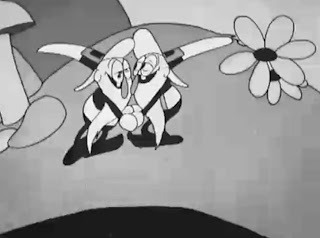 Another interesting thing is that the design of the dwarfs is very similar to the first iteration of Mickey. The small circle stomach and then rubber hoses leading off the body make the dwarfs look like Mickey with a beard. It’s the beards that are the fun features of the dwarfs, as they use them much like Julius or Oswald would use their tails. The beards are brooms, instruments, a second pair of legs or whatever the scene requires. 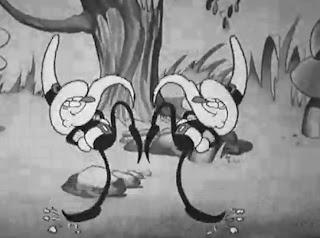 It is very interesting though to contrast the themes and flow of the Silly Symphonies to the Mickey Mouse cartoons. In the Silly Symphonies, the action is always centered around the music, but it features more adult themes, like hell, drinking, skeletons and the like. There’s also a bit more experimentation in the Silly Symphonies. The Mickeys, while mostly following the same formula of being built around the music, follow a more innocent tone, with Mickey interacting with the animals to provide entertainment or make friends. It’s an interesting contrast. When I can tell you what that helps me deduce about Walt and his mindset in 1929, I’ll let you know.
Posted by Ryan at 2:19 PM