After the warm, fuzzy feeling of Springtime, the next Silly Symphony, Hell’s Bells, takes a sharp left turn, leaving the springtime feel of nature for the hot fires of Hades. Hell’s Bells is a macabre tour through the torment of Hell, and it’s also another winner by Ub Iwerks and his animation team.

The short is like all the other Silly Symphonies, merely a pictorial representation of various pieces of music. The music in this one, though, is a cut above some of the others. Sure, there are adaptations here of other songs, but the main song during the devils dancing sequence was so good that Alfred Hitchcock picked it up years later as the music for the opening of his television show. 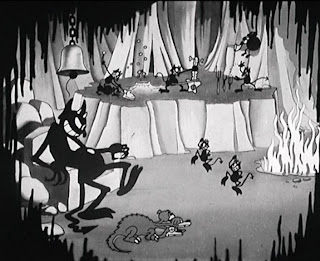 But the animation is the real star here. It’s a real departure from the now solid Mickey and the animal creatures seen in Springtime. The devils in this short are spindly creatures, and their arms and legs flail about in true rubber hose animation style. That wouldn’t be notable, except for the fact that the trend in the other Disney shorts of this time is moving away from that exaggerated movement and towards more “realistic” forms and movements. 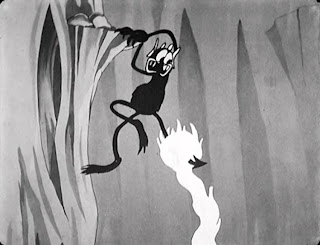 This short was directed by Ub, and it shows. The frantic dances, the darker imagery and the “unhappy” ending of the devil being swallowed by his own flames are all more indicative of Ub’s work, rather than Walt’s. It’s especially interesting to watch this short back to back with Springtime, since they were in production at the same time, and Springtime was directed by Walt. The contrast between the two filmmakers could not be more stark. 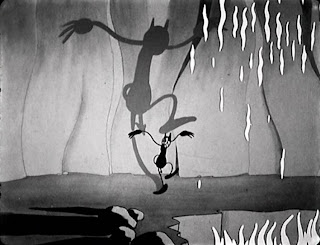 Not to be outdone by Walt and his work on Springtime, Ub features some great effects animation in this short as well. One scene features a devil dancing over a fire pit, and the shadow on the back wall dances with him. It’s nice work. Another features a spider swinging over a fire pit, straight towards the audience, blacking out the screen, then all the way to the far away perspective and back again. Again, very nicely done. 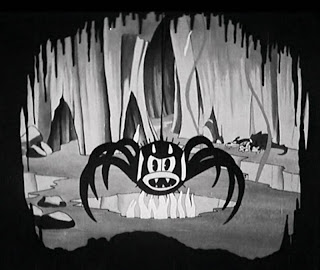 The sadistic lead devil, that one would presume is Satan, is an interesting character. He acts how you would expect Satan to act, which is good work by Ub and his team, but it’s totally new in the world of Disney animation to this point. This is a true villain character, feeding fellow devils to the three headed dog, Cerberus, and chasing one when he refuses. Rather than the bungling or bullying villain, this is a new turn towards a more serious and disturbing villain. 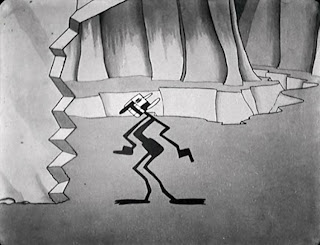 The whole short is full of disturbing imagery, that makes it a true work of art. Some of my favorites include a snake swallowing a bat then sprouting its wings, devils milking a dragon and getting fire instead of milk, and the short wanderings of the Grim Reaper at the beginning of the short.

Looking at this short, though, its easy to see that Ub Iwerks had different ideas about the things that one could do in animation. This short is really more reflective of the work he would do after he left Disney than anything I’ve seen to this point.
Posted by Ryan at 9:34 PM