The Cactus Kid, the latest Mickey short, is really just a remake of The Gallopin’ Gaucho, but it has some distinct differences that make this short very memorable. The main difference is in Mickey himself, which shows you how much has really changed in Mickey from his first appearances in 1928 to 1930.

The storyline of this short is very familiar – Mickey enters a cantina that is inhabited by Minnie. After some great dancing and musical performances, Pete enters, with his eyes set on Minnie. After a confrontation with Mickey, Pete kidnaps Minnie, and Mickey gives chase. Mickey manages to knock Pete off his horse and over a cliff, leaving he and Minnie to look over the cliff and wave goodbye. 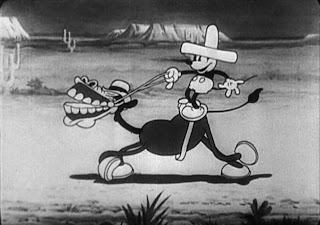 It’s a simple story, and very much like The Gallopin’ Gaucho, but what’s interesting is the change in Mickey. In Gaucho, Mickey is a swaggering bundle of bravado, who enters the cantina through the window, drinks a beer and smokes a cigarette. He’s rough around the edges and grabs Minnie to dance, not asking permission. 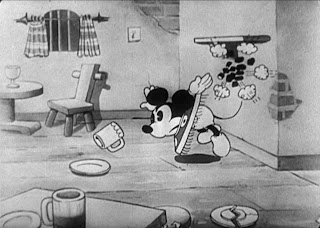 In Cactus Kid, however, Mickey enters through the door, after riding in on Horace Horsecollar. He meekly enters and joins Minnie in a song, not joining in the revelry with a drink or cigarette like last time. He plays music with her, and when he gets a little fresh, tweaking her nose, Minnie fires back, throwing plates at him.

The old Mickey would have been more forceful, but this version of Mickey instead takes a couple of mugs that Minnie threw at him and uses them to do a Mexican dance, using the mugs as castanets. It’s quite the change from the mouse who grabs the girl and forces a kiss like he did in Plane Crazy and Gallopin’ Gaucho. 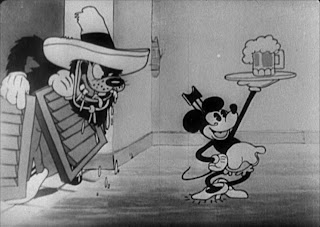 There are some good pieces of animation here, especially in Mickey’s personality. When he confronts Pete, you can see the courage or fear on his face depending on whether he has the upper hand. Right after that, there’s a great sequence where Pete knocks out the lights, and we only see the action through flashes from the muzzles of the guns the two are firing at each other. 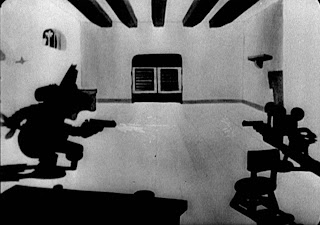 The finale sequence is very much a retread of past Disney cartoons, with the horse chase echoing scenes from the Alice Comedies and Oswald. Mickey extends Horace’s neck to walk over and jump on Pete, just the way the other characters did in previous shorts. But the overall effect of having a Mickey that is more shy and somewhat of a loveable loser is a good one. It makes Mickey more relatable and interesting than the bravado Mickey, at least in my eyes. 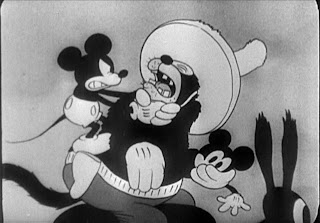 I have to say though, that it would have been interesting to see the more aggressive Mickey in some of these later cartoons. How would things be different today if Mickey had continued down that path? Obviously, Walt felt that the public preferred this version of Mickey to the original version, but it would have been a very neat experiment to see the original version carried through.
Posted by Ryan at 1:54 PM