Pioneer Days is a truly charming short, featuring a lot of action, a great story and some really well done animation. It shows what the Disney animators were capable of doing, given the time to work on a short and make it their own. 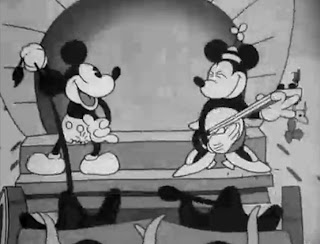 The constant struggle between music and story finds a happy balance here, as the songs are used to forward the story. In some ways this foreshadows some of the musical films that Disney would release later. Early songs like “Oh Susannah” being sung by Mickey and Minnie are used to set the scene and put the viewer in the proper frame of mind, just as “Jingle Bells” was used in Winter. 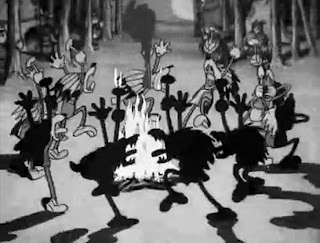 Through the use of the two camps, there is the ability to use music in both settings, and incorporate dances to make things more interesting. We get three distinct songs from the pioneer camp, including a square dance and a lonely love ballad delivered by an old goat – literally. That subtle play on words is one of my favorite gags of the short. 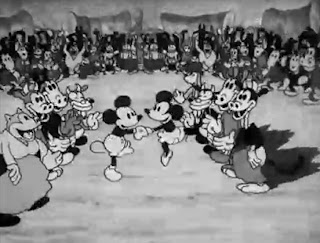 The real action begins, though, when the Indians invade the wagon camp. From that point forward, it’s inspired chaos. The scenes of frantic pioneers scrambling around and trying to evade the arrows are great and add to the sense of motion that moves through the final part of the short.

One of my favorite bits features the Indians riding around the outside of the camp, while the scenery seems to turn the opposite direction. I know it has to be a simple trick, but it looks so dynamic on screen, that I couldn’t help but watch it twice. Kudos to the animators on that one. 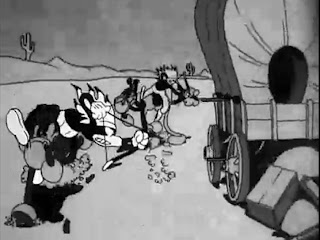 The finale of the short comes when Minnie is kidnapped by one of the Indians, and Mickey rides off to save her. A great piece of personality is seen in Mickey’s face when he shoots his gun at the Indian menacing Minnie and all it shoots is a cork. Mickey’s look of helplessness mixed with surprise is a treat. 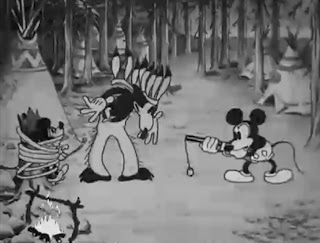 There is a slight twist on the familiar formula here, as Minnie comes to Mickey’s rescue by dropping a hot coal down the Indian’s pants. It’s the first time we’ve really seen Minnie in an active role, which is nice to see. 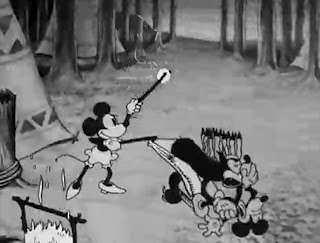 I enjoyed Pioneer Days a great deal. It does show some advancement in the Mickey shorts, continuing on the heels of The Gorilla Mysery and The Picnic. In Mickey’s third year of action as a cartoon star, it seems that Mickey is finally coming into his own.