Mickey Mouse’s cartoons have definitely returned to the standards set in the Oswalds, if The Picnic is any evidence. Much like the short I reviewed yesterday, The Gorilla Mystery, this short relies on story and gags to carry it along, with dancing and musical sequences merely complimenting the main plot. 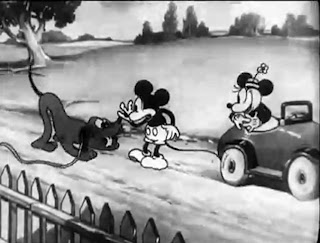 This short also features the return of Pluto, although here he is Minnie’s dog, not Mickey’s. The design of Pluto varies quite wildly, as he appears one way in his dog house, another while chasing rabbits, yet another when being rained on and then in his original form from The Chain Gang. It appears as though the Norm Ferguson animation of Pluto from that short was reused here, although I can’t be certain.

The story of this short is simple – Mickey and Minnie take to the country for a picnic. But there are some great stops along the way that make the short memorable. For example, as the short opens, Mickey is driving his car to Minnie’s house to pick her up. Along the way, he is whistling “Minnie’s Yoo Hoo,” his theme song, and has various horns as well as the car itself join in. 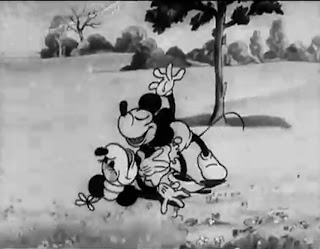 Pluto, though, is the breakout star of the short. He gets picked up with Minnie, and tied to the car in a very Chevy Chase way. Along the road to the picnic site, though, Pluto sees some rabbits doing a dance, and starts chasing them, dragging the car along with him. It’s a nice starring turn for Mickey’s pet.

The other fun part of this short is the sequence where the animals steal all of the food. While Mickey plays a tune on a record player and dances with Minnie, the animals of the woods move in to steal his feast. It’s very well done, as we get wide shots of the massive amounts of animals moving in, tight grabs of bugs filling up on honey or cake, and individual shots of squirrels or other animals making off with nuts and meats. 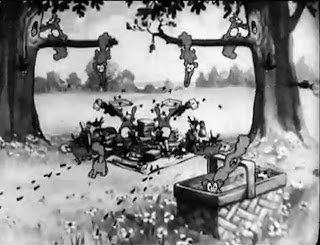 It is interesting here to note Mickey starting to take a turn towards a background character with more of a role for his supporting cast. As we know, when we get into the color films, Donald and Goofy take a big role in carrying some of the Mickey shorts, and Pluto would eventually eclipse his owner in the cartoon realm. This may be the start of that trend. 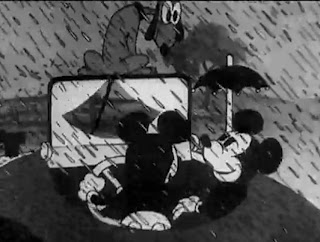 Other than that, there’s not much to say about The Picnic. It’s definitely a solid cartoon, with good gags and a good story. There was some discussion in the comments from yesterday’s review of The Gorilla Mystery as to whether Ub’s departure “helped” the studio move towards this story-based mode. I think that has to be the case. Without the master of the “silly dancing” sequences, it seems Disney was playing to his artists’ strengths by going with less music and motion based shorts and more with solid gags and story. To me, that’s part of the Disney legend, is how he took people and worked with their strengths. This was very much the case with the building of Disneyland, but that’s a story for another day.