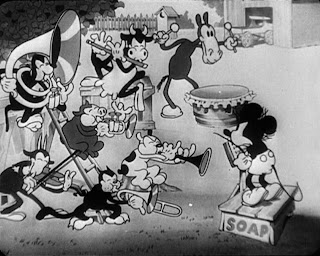 This short is again basically an excuse for Mickey and the gang to play some music, but it features Mickey in his conductor role, that he will revisit later in The Band Concert and some other shorts, as well as in the parks in Mickey’s Philharmagic. It’s really quite a legacy if you think about it. 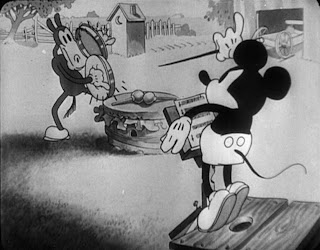 From the point Mickey takes to the soap box to conduct the band, it’s mayhem. The animals are all playing instruments this time, which shows a bit of the growth in the animators and Walt. Remember back to earlier shorts, when the band would be playing on makeshift instruments made out of spare string or even other animals? Now we are looking at fine horns or violins or bass. It’s quite the change, although subtle if you have not been watching all of these shorts in a row. 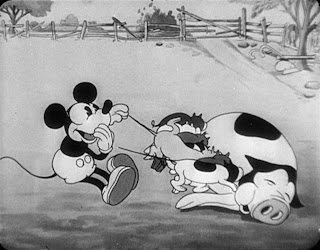 There are some repeat gags here, such as Mickey yanking on piglets’ tails to make some music, just as he did in Steamboat Willie. There are also a couple of familiar looking characters that make up part of the band. Recognize these two? 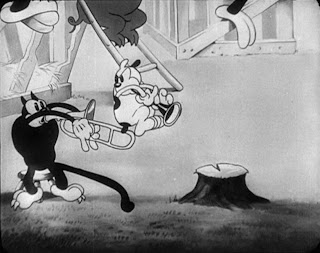 To my untrained eye, it looks like an update of the cat and dog characters from the Laugh-O-Gram Films days. It’s kind of neat to see little touches like this that harken back to the olden days of Disney cartoons.

The other thing that continues here from Just Mickey is the stellar work on Mickey’s expressions. One that stands out is his expression of disgust when a pig with a trumpet keeps interrupting the symphony. 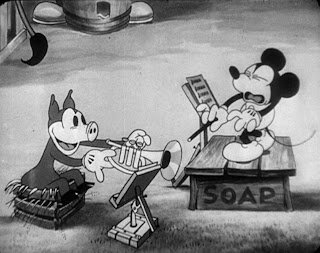 Just looking at the expression, you can see the horror at the bad note and irritation at being interrupted. There are other instances in the short, such as his angry conducting and happy dancing. All of it makes Mickey a very memorable character, full of personality, in a way that none of the earlier Disney creations were. 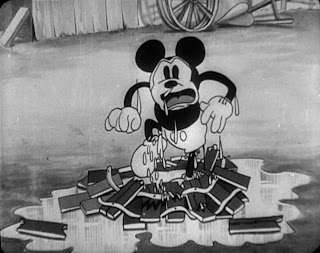 The Barnyard Concert is a good short, with some fun gags, but it’s not groundbreaking or a high point of Mickey’s career. It does show some advancement though, however incremental. From the addition of real instruments, the personality of Mickey, and the detail in the drawings, you can definitely see a bright future for Mickey’s cartoons based on this short.


All images copyright Disney. All rights reserved.
Posted by Ryan at 3:09 PM