The Silly Symphonies started as a way to let the animators create new characters and have some free form fun while setting the animation to music. The evolution of the shorts after Carl Stalling and Ub Iwerks left the studio was very stilted, with a few jumps into emphasizing story and a few shorts pushing music. With Mother Goose Melodies, it seems the Silly Symphonies have reached “maturity.”

Based on the Silly Symphonies shorts I have seen after this, Mother Goose Melodies seems like a turning point in the series. Much has been made here of the emphasis on story vs. music, but this short emphasizes both in equal measure, and creates an extremely compelling and funny cartoon. 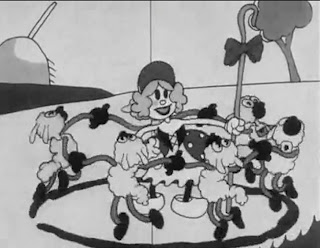 This short sets up a framework that literally opens the book to many different vignettes. The idea is that Old King Cole is settling in on his throne, then calls for Mother Goose to bring forth his book to show him some new stories. Mother Goose serves as the introduction then to many of our favorite nursery rhymes. 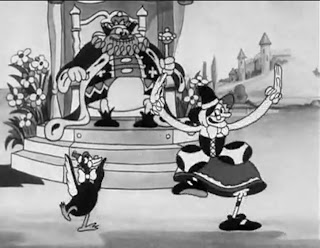 Once the book is opened, the short becomes a series of snapshots of famous nursery rhymes, sometimes long and sometimes only a few seconds’ worth. Everything from Little Miss Muffett, Lil Jack Horner and Jack and Jill are done, along with many, many others. Each one features great gags, such as the spider in Little Miss Muffett. It does the same action as the spider in Hells Bells, swinging towards the camera and “swallowing” it, but it is still a great gag. 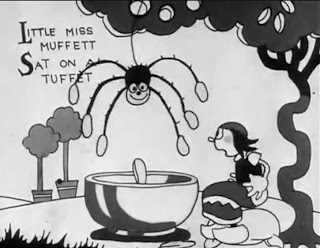 The best gag, though, involves the book itself. The tales never leave the page of the book, much like would be done much later in The Many Adventures of Winnie the Pooh. Mother Goose turns the pages, and the camera will zoom in on a page until it fills the screen, but the action of the nursery rhymes never escapes the book, until the climax of the short. Even when Jack and Jill fall down the hill, they slam headlong into the page and don’t fall out. 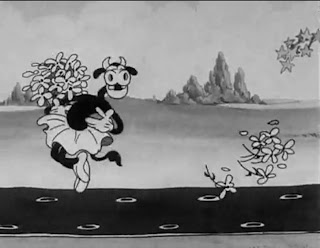 There are some interesting cameos here, as well. In the beginning we see Clarabelle laying flowers before Nat King Cole’s arrival. The parade sequence at the beginning of this short involves small mice much like were used to presage Mickey in the Oswald shorts. It’s also a theme we’ll see again in other shorts, of the side scrolling parade of gags coming into view. 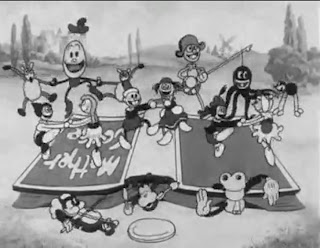 The fun climax of the short upends the book, spilling the characters out into the “real” world with mass chaos ensuing. It ends up being a musical finale, which is very fitting. This short moves so quickly, switching from story to story, that it really holds up today with our shorter attention spans. It’s extremely funny, and bears multiple watchings to catch all the gags packed into each frame. Each story has small touches that you will not catch the first time around. This one is highly recommended.