At first glance, the Silly Symphony entitled Frolicking Fish is not all that remarkable. It’s merely a peek at some fish dancing underneath the waves, being menaced occasionally by an octopus. But when you look closer, you can see a real breakthrough in animation for the Disney artists. 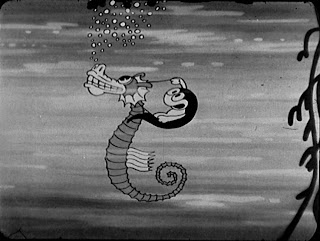 Norm Ferguson, a former New York animator who joined the Disney team fresh off of the Aesop’s Fables cartoons produced by Paul Terry, had the task of animating a trio of fish. This was an easy task for someone of Ferguson’s skill, and there was a tried and true method of doing motion or dancing in the shorts to this point. 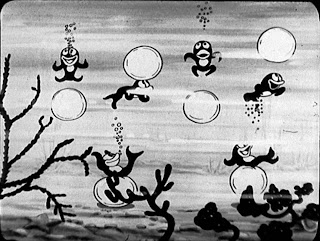 Under Ub’s tutelage, the Disney animators were taught to draw motion in poses. The animator would draw movement up to a pose, then hold the pose for a few frames before moving again. This led to some very dynamic images, with the “poses” being held in the audience’s sight. That left a definite impression on the audience. 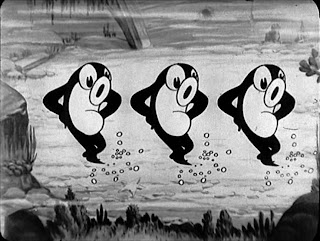 However, Ferguson chose to do something different. He made the decision to skip the poses and keep the motion flowing, which was definitely a risky call. It worked beautifully, however, and his trio of fish have a very fluid motion and smooth movement that Walt was enamored of immediately. Walt ordered the other animators to study Ferguson’s style. 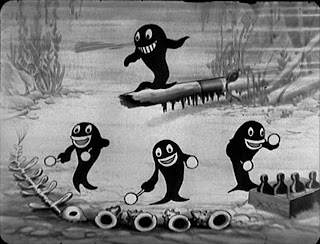 The other notable aspect of Frolicking Fish is the main villain, the octopus. His movement in this short is also remarkable. The octopus pops out of an old treasure chest, and begins menacing the fish. But his tentacles are rapidly spiraling in and out, backwards and forwards, in a flurry of motion that is very well done. 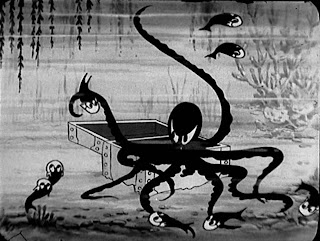 The octopus continues in a tradition of Silly Symphony villains that have come before, like Satan in Hell’s Bells or the lion in Cannibal Capers. The octopus is an equal to those, menacing the fish in several ways before a fish manages to escape and drop an anchor on its head. The resulting ink excretion from the octopus provides the fade to black at the end of the short. 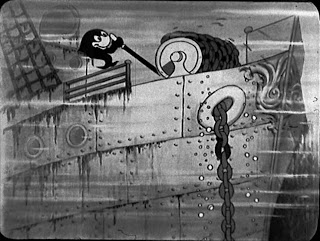 Other than the octopus and Ferguson’s motion, there’s not much to discuss. Frolicking Fish, like most other Silly Symphonies, lacks much of a narrative. Not that having a story is always necessary, but there are no characters to latch onto, like there are in the Mickey shorts. Without a main character or a narrative flow, it’s difficult to really get into this short, although it is entertaining for what it is.
Posted by Ryan at 3:26 PM