A small bonus short will wrap up the year 1930, a year that saw great changes in the Disney animation effort. The short Minnie’s Yoo Hoo is simply a sing along reel, that was distributed to theatres to use during their Mickey Mouse Club meetings. As such, it’s not really a full short, but it’s interesting nonetheless.

To those who are only familiar with the Mickey Mouse Club as Britney Spears’ nascent career, back in the 1930s, clubs existed in theatres, where owners would get kids into the theatres by joining the Mickey Mouse Club, and then playing a series of Mickey cartoons for them.

So, this short was designed to give the kids something to sing along with, which was a popular part of the movie going experience in those days. The reel opens with a short title card introducing the short, including the introduction of Mickey as the master of ceremonies and his jazz band. 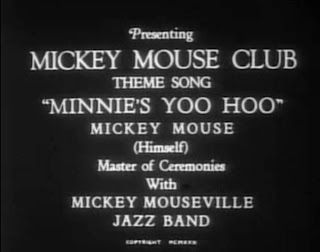 In truth, it’s really just the same animation that was used in Mickey’s Follies, with a new background of a theatre. If you’ll recall, in that short, Mickey stood on the piano and sang the song “Minnie’s Yoo Hoo” out loud, and that’s repeated here. Mickey goes through the song once, joined by his animal friends. 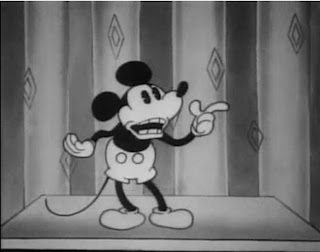 Then, Mickey peers through the curtain and asks the audience to sing along. The voice over switches to a baritone, who sings along with the words of the song on the screen. Again, I love this song, mainly because of the performance of the Main Street Saxophone Quartet on the old Disneyland/Walt Disney World album. But it is interesting to notice the lyrics. 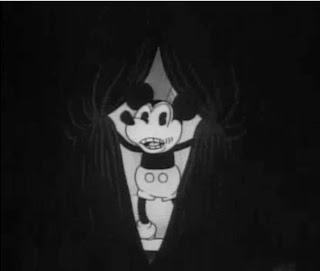 All of the lyrics refer to Mickey and Minnie in the barnyard, working on the chicken coop for example, which becomes more and more irrelevant later. It’s often been commented that Mickey’s career path followed Walt’s in that he moved from barnyard settings to city life and domestic suburban bliss. Never is that more apparent than in this early theme song. 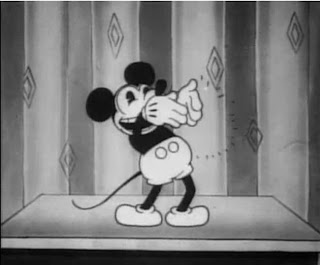 Even in the short itself, we see Disney reusing animation that was once set in a barnyard, moving it into a nice looking theatre. In just 2 years, from 1928-1930, Walt Disney went from a bankrupt producer with only one key animator in Ub Iwerks, to the dominant cartoon studio in Hollywood, able to survive the defection of Iwerks and Stalling and prosper. Very impressive work.