Midnight In A Toy Shop

It’s often been my complaint about the Silly Symphonies or the Mickey Mouse shorts that they lack a cohesive narrative. The characters tend to open the short with a dance or silly song, but its never driven by any reason or motivation. For the Silly Symphonies, that’s not a big issue, since they are supposed to be “music videos” for lack of a better term. The latest entry, though, was a great surprise, because it gives the main character a strong motivation and follows through his story in the entire short. 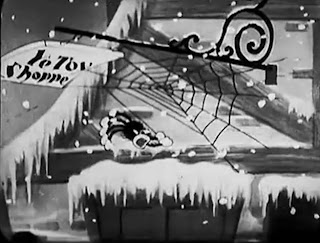 Midnight in a Toy Shop is the short, and the main character is a spider. This in itself is a new twist, because we have seen spiders before in the Silly Symphonies, but they have always been villains. There was the menacing spider in Hell’s Bells or the spider that devours the other bugs in Summer. This spider is a shivering mess that manages to squeeze through the door to the toy shop in order to stay warm. It’s quite a contrast. 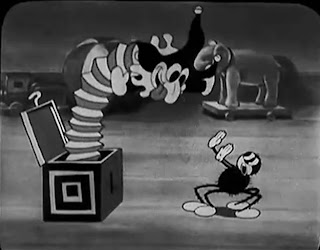 The plot is basic – the spider finds himself in the toy shop and starts playing with the toys to amuse himself. As he does so, some of the toys decide to come alive and join in, while others are manipulated by the spider. What’s very interesting is that the music is sparse in the first part of the short, as the spider tiptoes his way around the toy shop. The music does not move the storyline, the character does. That’s a departure for the Silly Symphonies. 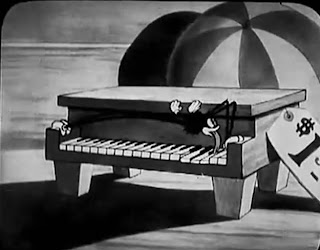 There are some very good sequences here, such as the spider playing the piano. He perches his feet on either end of the keyboard, and uses his body to play the keys. It’s a great gag, and a unique one as well. We’ve seen a ton of pianos in the early Mickey and Silly Symphonies cartoons, but this is a unique use that we have not had before. 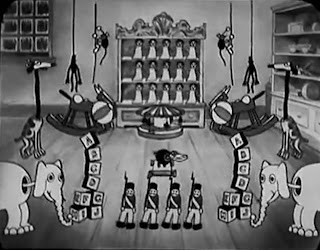 One unfortunate gag in this one is the use of the “Mama” dolls. The spider’s music inspires two curly headed dolls to begin dancing in time with the music. Every time they stop, the dolls say “Mama,” just like old baby dolls used to do. When they stop, though, a loose limbed black doll begins dancing and says “Mammy,” instead. It’s a blatant racist characterization, which was not uncommon at the time, but to me it was jarring. 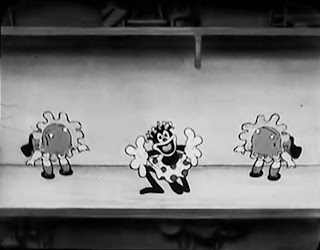 A rather neat thing for the storyline happens early on, when the spider falls into a dark part of the store, and has to light a candle to see. This happens right before the piano sequence. The candle is perched on the edge of a box of fireworks, and you think that it might get knocked over, but it doesn’t, at least not yet. At the end of the short, though, the spider flies through the air, catches the candle and falls into the box of fireworks. 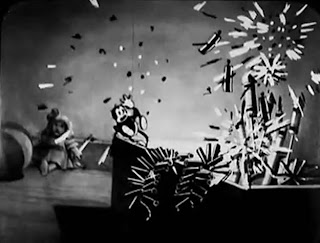 The fireworks ignite and start chasing the spider across the room, eventually chasing him out of the store. It’s a very nice piece of continuity, which has not been a hallmark of the early shorts.

Midnight in a Toy Shop was a great cartoon, very enjoyable and easy to follow. I think the narrative makes the difference here, and I’m interested to see if this follows through upcoming sorts. Wilfred Jackson directed this one, so I’ll see if this is something his animation team did, or if it was a studio wide direction.


All images copyright Disney. All rights reserved.
Posted by Ryan at 2:24 PM