Playful Pan embodies the spirit of the Silly Symphonies and the evolution that we have seen, where story serves as the driver for the musical numbers. It’s a very well done short with an overarching storyline and some great animation. 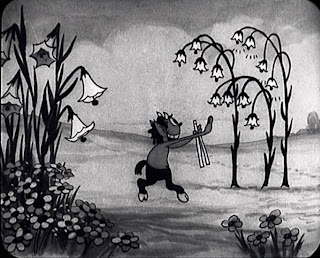 The main thing about this short that is notable to me is that the title character of Pan plays only a minor role in the chaos that ensues throughout. Pan opens the short by leading a pair of fish on a silly trail through a small lake, but disappears about midway through. While that makes sense in the story, it is still kind of odd. 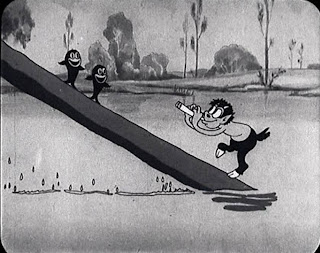 The storyline has Pan making his presence known in the forest, doing the aforementioned dance with the fish, and then going off screen as a lightning bolt strikes a tree, literally sawing it in half. A fire ensues, and the fire takes on personality, jumping on trees, spanking animals, and pursuing others throughout the forest. 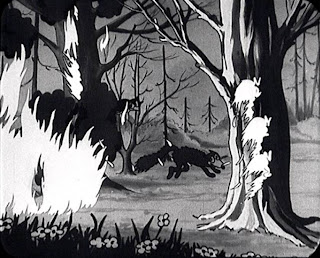 Of course, the animals then go to Pan to help. Pan is able to coerce the fire to follow him, by playing his flute, then leading the little animated firelings to water. After dealing with a particularly reluctant flame, he manages to get all of the fire to douse itself, and saves the forest. 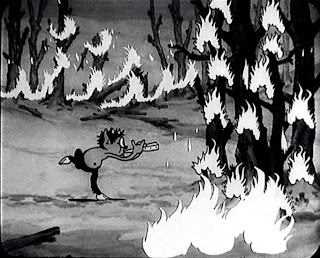 The animation of the fire was really the standout of the short in my opinion. The fire has so much personality that it becomes a character, with little flames with legs marching off of one tree and jumping to another as just one example. There are plenty more, such as the flames pursuing yet another Mickey bear up a tree and grabbing it. 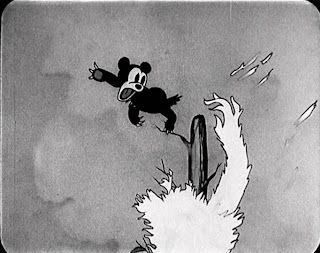 To digress briefly, I remember the first time I saw a Mickey teddy bear at Once Upon a Toy at Downtown Disney. I flipped out. How could they do such a thing? Mickey is a mouse, not a bear, etc., etc. The more I see these Mickey-esque bears, the more I laugh at myself.

Other than the fire, there is not much of Playful Pan that really stands out. The music is mediocre, at least to me, and there’s not a great deal of stand out animation, again, other than the fire. What I did like to see was the squirrels, my favorite characters from Autumn, had returned here, evacuating their tree. For some reason, those characters appeal to me. 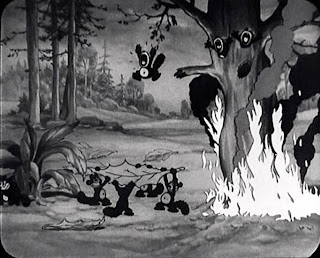 Playful Pan is the last of the Silly Symphonies from 1930, so it is interesting to notice the change that has occurred. Other than the throwback of Winter, the latter half of the year had Silly Symphonies that focused on story first, and music second, something that was not the case when the series started. In this short, the music is really an afterthought, which is quite the departure from the original concept.