The latest Mickey short, The Chain Gang, is really a remake of one of the Alice shorts – Alice the Jailbird. But just like the earlier short, it features such great laugh a minute gags that you don’t mind. 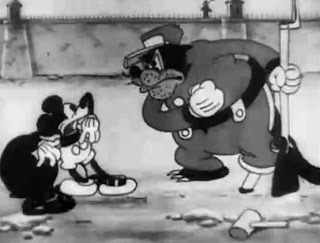 The basics of the short are that Mickey and his usual cast of characters are trapped in jail, led by Pete. Mickey is there, as is Clarabelle, Priscilla Pig and several other animal characters. They are forced to break rocks, but soon break into a rhythmic song based on the pounding on the rocks and aided by Mickey on the harmonica. 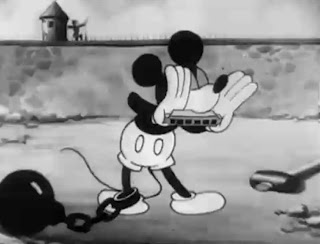 It’s there where things get really interesting. A riot is sparked, which features some hilarious scenes of prisoners speaking into the camera, the guards (all resembling Pete) shooting at each other, and Mickey finding a way to escape. It’s actually the same way that Julius escaped in the Alice short, by throwing the prison ball on one end of a seesaw that catapults him over the wall. The same gag even follows, as the ball then drops on Mickey’s head after he lands on the other side. 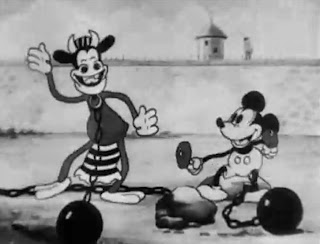 This short is notable, though, for what happens next. One of the guards pursues Mickey over the wall, accompanied by two bloodhounds. One of the hounds would go on to be famous not as Mickey’s pursuer, but as his pet. 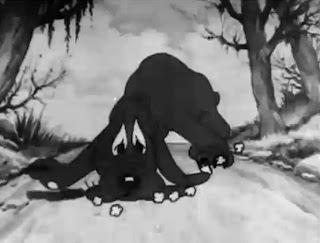 Yes, Pluto makes his debut in The Chain Gang, albeit a brief one. As such, he’s the third of the “Fab Five” introduced. We’ll keep eyes peeled for Donald and Goofy coming up soon. The short ends with Mickey finding a pair of horses that take him on a wild ride, ending up with throwing him off a cliff that lands him right back in the jail. 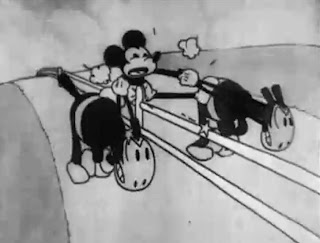 Otherwise, this short is very fun, but unremarkable. The main thing you notice is the rapid pace and the gags, which are tied together. The pace is kept lively with repeated fun gags, and the short does not rely on a song to move things along. The musical sequence in the middle of the film is short and plays off of the story of the prisoners breaking rocks.

Just like yesterday’s subject, Midnight in a Toy Shop, it might be that the Mickey shorts are beginning now to take a turn towards more story based subjects instead of music based shorts. It makes sense, as after Iwerks and Stalling left the company in early 1930, it would take a while for Walt and his team to catch up. As such, they would have had to get anything and everything they could manage into production.

This “accelerated schedule” theory would explain things like the reuse of animation in multiple shorts, especially The Shindig, or the use of repeat characters like the Mickey bear in Arctic Antics. Then, as the year wore on and the production schedule eased up, Walt and his crew would have been able to focus more on crafting stories for the shorts, which would have been reflected in the latest Mickey and Silly Symphonies. Just a theory, but hopefully an informed one.

All images copyright Disney. All right reserved.
Posted by Ryan at 3:51 PM