Mickey’s latest short, The Fire Fighters, is a great use of the character in his new role as the loveable loser. The bravado filled Mickey of the early shorts would not have worked in this cartoon, but Mickey as the hapless fire chief works really well.

To be fair, this is really a remake of Alice the Fire Fighter, the 1926 short that featured a team of Julius clones tackling a burning hotel building and rescuing Alice. Replace Julius with Mickey and Alice with Minnie and the storyline of the shorts are pretty much the same. The difference here are the strides that the Disney animation team have made in the four years since the Alice short was made. 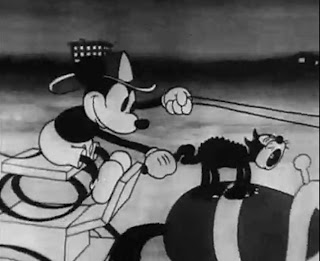 For one thing, the gags are outstanding in this short. From the beginning scenes of Mickey and his fire team asleep in the firehouse to the climactic rescue sequence, there are gags every few seconds that are very funny. There are some classics, like Mickey inhaling and drawing a spider closer to him as he sleeps. 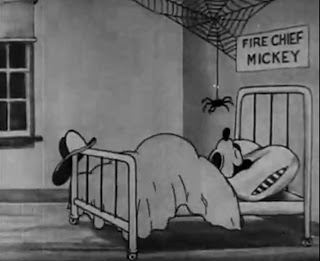 One of my favorites was the end of the alarm sequence, after all the crew has awakened and slid down the fire pole (really an ostrich). The camera pans over to a long bed, where we see the ladder waking up and watch it go through the paces to get on the truck. Animating the ladder as a character is a touch of genius, and very funny. 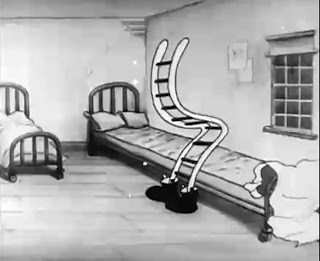 The gags don’t stop there, as Mickey and crew get to the fire site, but can’t get the hydrant to work. It merely dribbles water out. So, Mickey turns it into a cow’s udder shape, and “milks” the water out. But, Mickey isn’t the best fire fighter in the world, and spills the water on the way to throw it on the building, not once, but twice! It’s a hilarious turn of events. 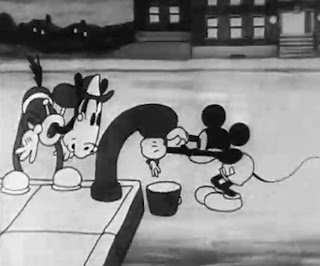 Mickey’s personality is great in this as well, showing his frustration with the hydrant or the fear of whether he’ll be able to save Minnie or not. He really is a character here, not just a collection of drawings, and that’s the way he’s been evolving throughout this period. 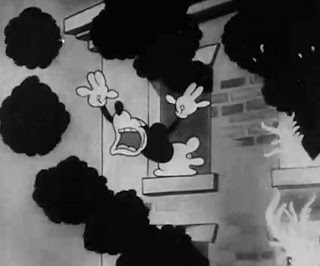 The short ends with a familiar gag, of Mickey falling to earth, using large bloomers as a parachute while he cradles Minnie. It’s a great visual, and it’s been used many times by the Disney team, but it’s still a nice, sweet gag. The twist here is that when they reach the ground, Mickey and Minnie poke up through the legs and have a kiss. 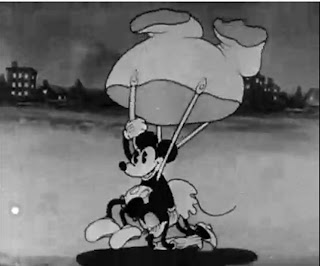 The Fire Fighters doesn’t have any major animation advancements or turning points in Disney history. It does, however, have a tight narrative and a load of great gags. That makes it a winner in my book!


All images copyright Disney. All rights reserved.
Posted by Ryan at 2:51 PM