Mickey’s evolution continues in today’s short, Traffic Troubles. The storyline is king, but it’s packed with gags and features a working man Mickey for the first time I can recall. Our little mouse is growing up!

In this short, Mickey serves as a taxi driver, driving a car with eyes and a mouth that made me think of Bennie the Cab from Who Framed Roger Rabbit? I don’t think those animators drew from this film, but as someone who saw that first, that’s what it brought to mind. The expressions of the car were very similar to Bennie. 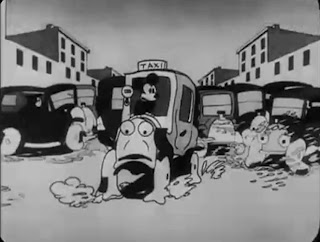 Mickey has two passengers in this story, Percy Pig and Minnie Mouse. The first one was Percy, who is dressed here as a prominent businessman. The interesting thing about this is the setting. Mickey’s opening sequence and the ride with Percy is set entirely in the city. It’s a very poorly run city, though, as we will see. 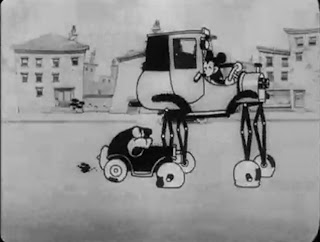 One of the best gags in the film is the pothole sequence. After passing some rather large puddles, Mickey’s cab gets caught in a bunch of potholes. There’s some animation similar to other shorts where we see the cab driving head on towards the viewer, stretching its wheels or contracting itself to avoid the potholes. That’s pretty funny as is, but then there’s the fare meter.

As the taxi hits each pothole, the bounce causes the fare meter to increase, prompting a big smile from Mickey. This happens a couple of times, until the car hits a very large hole, and bounces the meter back down to the beginning. The frustration on Mickey’s face is a great piece of animation, and very funny. 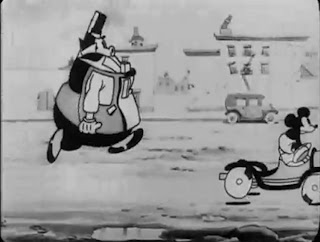 The Minnie sequence shifts to the countryside. Mickey is able to pick up Minnie in the city, then takes her on a detour out over the fields and plains. Of course, there are still rocks and potholes here as well. Once Mickey’s car hits one more rock, it bounces up and the license plate falls upside down, and the numbers spell out “Oh Heck” in a very clever gag. 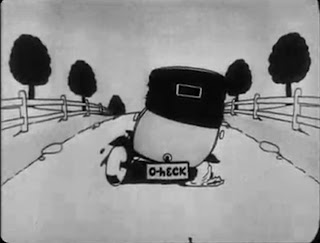 Ultimately, they get the car started again when Pete, in the second of his two roles in the short, pours some sort of snake oil in the tank. The car takes off and ends up getting ripped off its axles, falling onto the back of a cow for the end of the short. Again, all very well done and extremely funny. 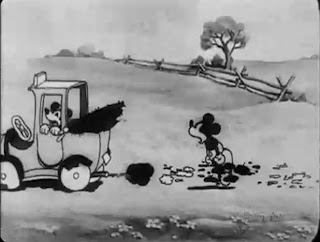 This may have been the funniest of the Mickey shorts so far, although I’m sure there’s one I can’t remember at the moment. There were gags throughout that were funny even if not entirely original. The gags with the car have mostly been done before, either in Alice, Oswald or earlier Mickeys. But mixing in stuff with the potholes, the cow and Pete as a police officer make this a really fun short.