The Silly Symphonies quartet of seasons finishes with Winter, which is a deviation from the recent pattern of story-based shorts from Disney. Winter is about what you would expect as a follow up from the earlier “seasons” shorts, light on story and emphasizing the dance of the animals synchronized to the music. 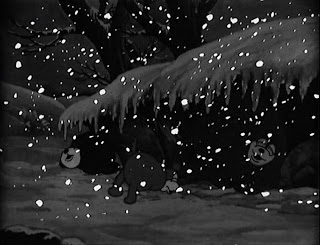 What was really interesting to me on this short was the commentary on the disc by Leonard Maltin and Daniel Goldmark. They pointed out a few things about the short and the era that are very intriguing, and tie into our frequent discussion here about story and narrative versus fun and music.

The thesis that Maltin and Goldmark put out in the commentary is that the synchronized music and dancing makes sense given the era. At the time, there were not as many entertainment options in the home as today. That’s obvious, of course, but think carefully about it. There was no television, books were available but weren’t cheap, most families had a radio but there was not as much programming as today. No internet, of course, but also no video games, iPods or any of the other appliances we rely on so much. 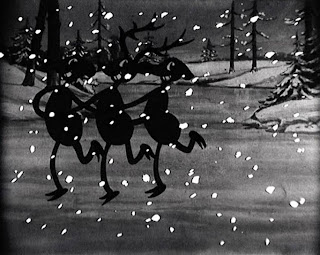 So, goes the theory, people in these homes turned to music for entertainment, either making their own or listening to the radio. I have to admit, when Maltin said this in the commentary, it struck me how right he was. I remember my Grandmother recalling how she would finish working in the field for the day and come into the house to play music while her mother finished supper. I heard the same from my Grandfather on the other side of the family, although he was in the city. 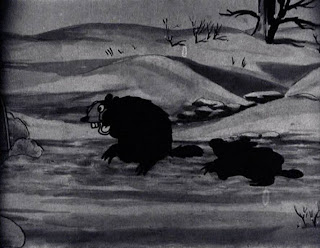 It would make sense, then, to see so much music without a narrative in the Silly Symphonies. Just as these in-home music sessions were an escape from the day, the Silly Symphonies were escapism in the cinema. Maltin refers to as “a more musical time,” and I would say he’s probably right about that.

Now, I’ve done a disservice to the short itself not speaking about specific scenes yet. There are some quite good pieces of animation here, but nothing that stands out. My personal favorite was the moose that is shown using his antlers to paddle through the frozen lake then climbs onto land and starts his dance. The moose character had a lot of personality and was a great addition to the short. 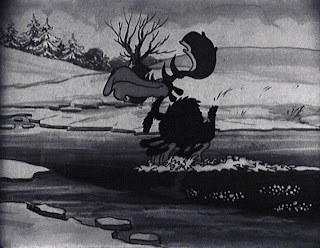 We do have another “Mickey” bear in this short as well. This one serves as a dancing partner for a larger bear, waking up his elder then doing a little dance on the ice. It does seem odd to have another Mickey bear show up so soon after Arctic Antics, but perhaps it speaks to the fact that production schedules were rushed and model sheets or familiar characters had to be reused. 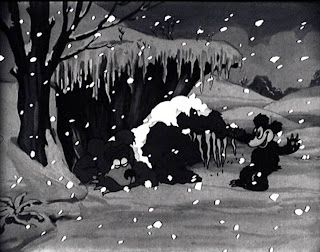 The other thing of note in this short is the use of familiar popular music to immediately bring the audience into the proper frame of mind. “Jingle Bells” and “Skater’s Waltz” are used early on, and really get the “winter” scenes off to the right start. It continues the trend seen in Monkey Melodies, when popular music themed to monkeys was used.