I’ve never seen Cast Away, the Tom Hanks movie where he spends 2-3 hours talking to a volleyball, but I have to say, I think Mickey Mouse’s version, The Castaway, has to be more entertaining. I think Mickey has a much better plan on how to survive being marooned on a deserted island.

The premise of this short is pretty simple – Mickey gets cast off onto an island, and proceeds to interact with the animals he finds there. There is, of course, the conveniently placed crate that contains, what else, a piano! He plays the piano and fights off some seals, a tiger, a monkey and a lion before finally escaping on a turtle. 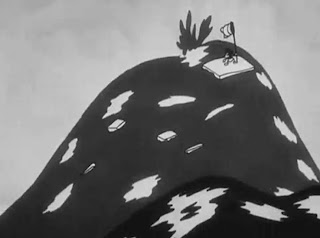 This is a very fun short, although there are not a ton of gags, and none nearly as good as Traffic Troubles or some of the other funny Mickey shorts. There’s a tone of happiness that is set almost from the beginning, as Mickey is tossed by the waves on his little raft. Even though things are bleak, Mickey is smiling. It is this cheerful optimism that makes Mickey so appealing. 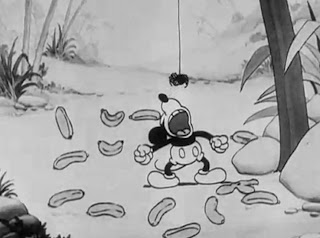 I’ll admit to a groan when I saw Mickey had rescued a piano and set it up on the beach, but rather than just go into silly dancing, the piano is a piece that furthers the story. The piano serves as a point of interaction for Mickey and the animals, not as a way to start a lavish musical number. 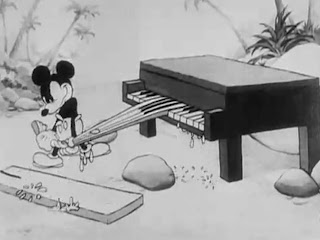 For example, when a small tiger cub wanders out of the jungle, he is constantly struggling with Mickey over who will play the piano. The cub first tries to play on the extreme ends of the keyboard, then pushes the foot pedals and finally hops on a tree that bends down to hit the keys. It’s a fun little sequence that allows the animators to have some fun with Mickey’s expressions of happiness quickly turning to frustration.

There’s also some seals that show up to do a little dance when Mickey first gets the piano working. I’m not entirely sure, but they look very similar to the seals from Arctic Antics, the Silly Symphony. Could be reused animation again, but I’m not 100% on that.

Of course, the idea of a main character on a desert island is not new for Disney. Alice Cans the Cannibals featured much the same idea, as well as some other Alice shorts. Neither is the jungle interaction new. Mickey did a similar turn in Jungle Rhythm. The Castaway, however, is the best of this idea so far. 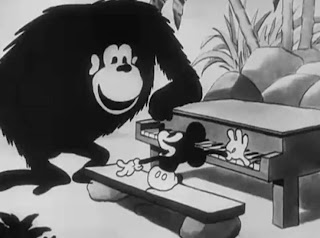 The final sequence featuring Mickey running from the monkey then the lion is the best part of the short. He manages to distract the monkey by spinning a rock on his finger, then tosses the rock aside only to hit the lion. The lion gives chase and Mickey gets him to swallow a log, before evading him by jumping on a rock in the river. 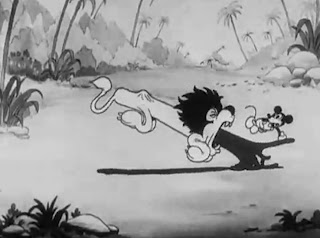 An alligator then menaces Mickey from behind, and just as the lion pounces towards our hero, he moves aside and allows the lion to fall into the alligator’s mouth, then ties the mouth shut with the lion’s tail. A great, funny sequence to end the short.