At first glance, The Shindig is just another all-singing, all-dancing Mickey Mouse cartoon, featuring Mickey and the gang playing music in a barn and dancing up a storm. But if you look a little deeper, there’s something very interesting going on in this cartoon.

This was directed by Burt Gillett, so I don’t know if what I’m noticing was his doing or the animators, but there is an undercurrent of a subversive nature to The Shindig. There are a couple examples that really stand out to me, but I’m certainly open to see what you guys think. 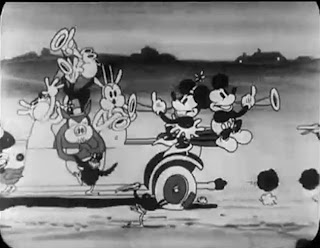 The first thing I noticed right away was the opening scene, which features a carload of animals heading to the dance. I noted above that this short was basically just Mickey and Minnie dancing in a barn, very similar to the earlier short The Barn Dance. So it struck me to watch this to see the front of the car labeled with “To the Barn Dance.” Was this an intentional way of the animators informing the audience that this short would be something they have seen before? 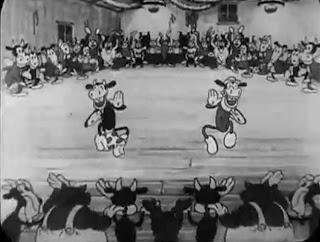 I sincerely doubt it, since they had no way to know that the audience would have seen the earlier short. But was it something the animators put in to refer to the earlier work? I have to think it was. They could have phrased that a few different ways, but calling it “The Barn Dance” is telling, at least to me.

The second thing is when Horace Horsecollar goes to pick up Clarabelle Cow. He pulls on her tail outside the shack where she is, then the camera goes inside the shack. Clarabelle is lying on her bed, reading a book entitled “Three Weeks.” Again, at first glance, not that significant. Clarabelle goes and puts on a skirt to cover her udders and basically “clothes” herself. This is the first time we’ve seen her wear clothes. 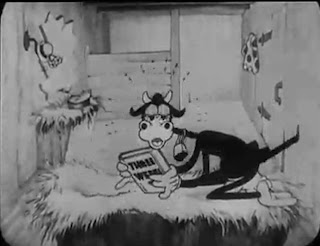 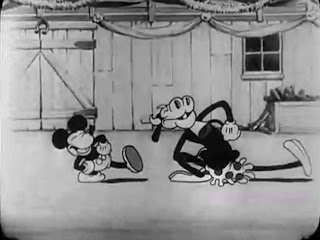 There may be nothing to these two instances, but they did stand out to me. Add to that the fact that this short reuses a lot of animation. Sequences of Mickey and Minnie playing music, Minnie at the piano, Clarabelle and Horace dancing, and the crowd applauding are all reused at least once, and some are used three times. Sure, that is probably due to the production schedule, but could it also have been an animator protest at having to do the same type of short again? 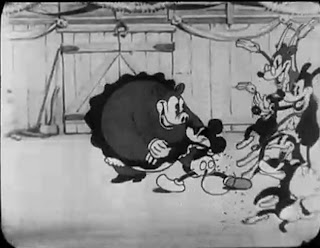 I know all this is wild speculation, but hey, that’s half the fun, right? In truth, there probably was nothing going on in The Shindig other than some fun gags and turning out another quick Mickey short. We see some new uses for Horace and Clarabelle here, and Patricia Pig even turns up again. But it’s fun to look at this short and its gags and possibly see that animators may be tired of the same old thing as well. Who knows?

All images copyright Disney. All rights reserved.
Posted by Ryan at 11:46 AM