After a series of Mickey cartoons that moved away from the barnyard setting, we’re right back in the country for The Barnyard Broadcast. It’s a short that uses the pretense of a radio broadcast to set up some fun gags, but is somewhat lacking overall.

Unlike previous Mickey shorts, there’s not a lot of contribution here from the other members of the cast. Pluto had taken over most of the action in some previous Mickeys, but here it is Mickey himself who is the star. He drives the plot, introducing the radio broadcast, and pointing out all the key players. 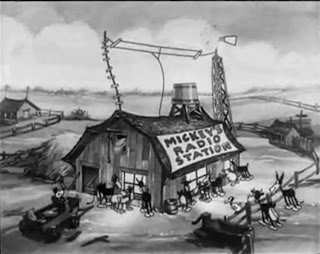 The cartoon opens in the barn, where Mickey, Minnie, Clarabelle Cow and Horace Horsecollar are providing the orchestra for Mickey’s radio broadcast. This opening shot is very fun, because it gives us a new look at Mickey. He is the master of ceremonies and the “business” man here. Mickey is not only running the radio show, but he also goes over to the corner and checks the equipment broadcasting the signal. It’s a subtle difference from the farmer/backwoods guy that Mickey was in the past.

Soon, though, we are given an antagonist, in the form of a cat that appears in the barnyard and starts messing up the show. The cat first meows into the microphone, but soon escapes Mickey and brings in its kittens. The kittens are the real stars of the show. They cause most of the mischief, suckling on the radio knobs, inhabiting a quartet of shoes, and driving Mickey to distraction all around the barn. 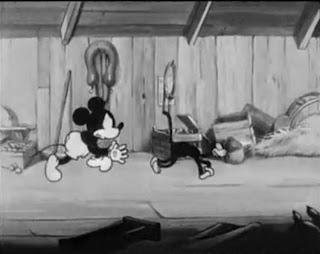 What’s interesting about this short is what doesn’t happen. We get an early shot of Pluto in his doghouse, and once the cat shows up, you would expect him to break free and go pursue the cat. Pluto does get free, but he doesn’t come back into the short. Similarly, when the kittens show up inside of a set of shoes, you expect a dance sequence to ensue, but it doesn’t. 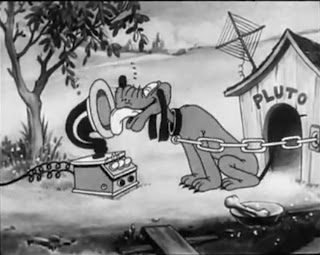 On a side note, the kittens remind me a lot of Figaro, from Pinocchio. The main cat is not in that design, but the kittens are similar. They are quite cute characters, and rightfully so take over a lot of the spotlight. 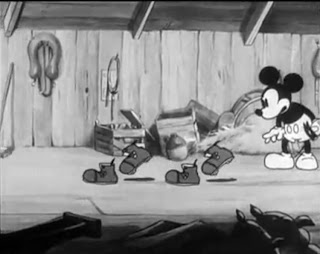 The finale again goes to the mass chaos that we saw in some of the previous shorts. Mickey chases the cat all over the barn, out the side, up a set of telephone poles and eventually through a water tower, crashing into the barn in a splash. The look on Mickey’s face at the end is priceless. 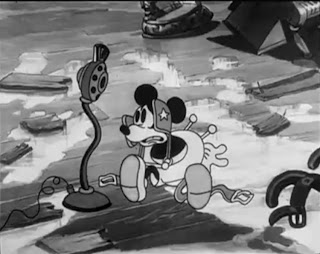 The Barnyard Broadcast is a fun short, but there are some issues with pacing. The beginning with the animals listening to the radio is rather unnecessary, as the main crux of the short is the interplay between Mickey and the cats. Once the cat shows up, though, it’s a fun ride all the way to the end.