The China Plate is an interesting case in the Silly Symphonies. It’s not exactly revolutionary, featuring a short subject about a young girl falling in love, but it is a new choice of subject for the series. Featuring a story about the Far East, set to Oriental themed music, it’s a new setting and a new toy box for the animators.

The titular plate gives this an interesting framework, as the short opens with a wide shot of the plate, featuring items painted on the plate that will feature prominently in the short. It allows things to be set up and also bookended with the plate’s image. It also puts into play a new paradigm of ancient art serving as a means of storytelling. 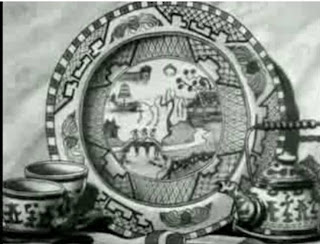 Once we get into the story itself, there are some early dance sequences that take up the time. We are introduced to the big heavy, the lord of the castle, and his servants. The next sequence has three dancing umbrella girls, before revealing our protagonist. It’s a fantastic reveal, as we see a dragon face coming straight towards the camera a couple times, before the dragon retracts, revealing that it was a painted umbrella. Behind the umbrella is our heroine. 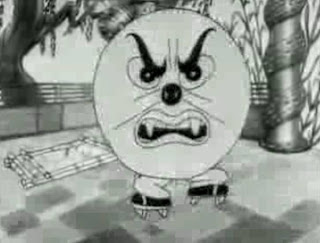 She proceeds out of the palace to chase a butterfly, ending up falling in the river. A young boy who has been fishing there rescues her, and of course they fall in love. What’s more interesting to me is the boy’s fishing method of lowering a bird into the water, and the bird captures the fish before spitting it out into the boat. It’s a wonderful gag. 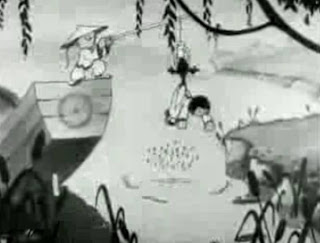 Of course, the young lovers must face obstacles. There are two big ones that get in the way – the lord and a dragon. The big lord (is that the right word for a feudal master in China?) gets upset when the boy tries to capture the butterfly and ends up hopping on the man’s head. He and his sweetheart run from the man, and manage to get a way only when he wanders into the open mouth of a sleeping dragon. 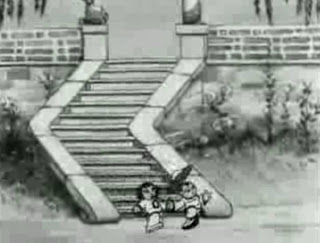 The dragon is defeated as well by the two young lovers, when they roll a boulder down a hill into its mouth. The dragon then is unable to pursue them, leaving them free to escape. The dragon is a great creature, though, and is a precursor to things like Maleficent in Sleeping Beauty. 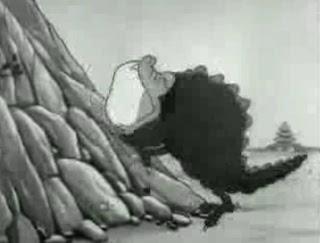 As I said, The China Plate isn’t exactly groundbreaking. The animation is fairly simple, with some interesting gags like the umbrella reveal. But there’s not a lot of personality in the characters, beyond the simple expressions of anger or love. I think it’s very interesting, though, to see the animators playing with a different atmosphere other than a barnyard/nature setting. It shows that there are different skills among the animators that can be shown in more than just the barnyard. That’s very important in its own way.