The Cat’s Out is a very good Silly Symphony, because it manages to keep the “silly” aspect and the “symphony” aspect in balance, making a well rounded short. This short manages to serve both the story and the zaniness of animation in just over seven minutes. Quite a feat, huh?

As has been noted elsewhere, the title has a double meaning. The short begins with the titular cat being let out of the house for the evening, where he sits on the front porch and begins caterwauling. The cat soon hops on top of a fence to serenade the night, which should bring to mind Garfield cartoons for modern viewers. 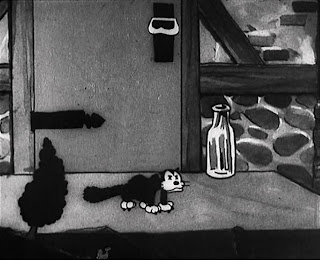 The second meaning of the title, though, becomes clear in the next sequence. The cat scales a nearby barn when he hears a bird chirping in competition with his singing. In an ill fated attempt to capture and eat the bird, the cat lunges forward and misses. 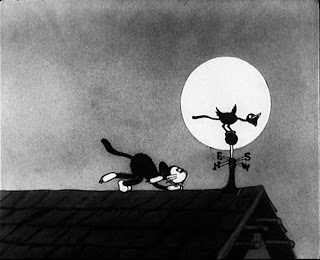 He falls off the barn, and the weather vane that the bird was perched on falls down to conk the cat on his head. This gives us the second meaning of the title. The cat is “out,” as in he’s not waking up. The cat’s nine lives float up to heaven, with wings and harps, until the cat’s tail involuntarily lassoes the last one and forces it back in. This is an oft-repeated gag in cartoons, but it’s done well here. 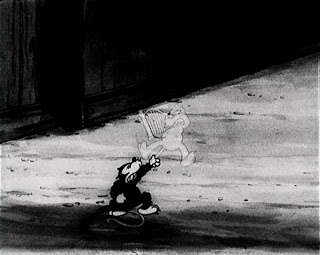 From that point forward, the short becomes the cat’s dream world, as he is menaced by a variety of creatures. It starts with the bird he threatened becoming three times the cat’s size, and waving its missing tail feathers at him. From there, though, things get even crazier. 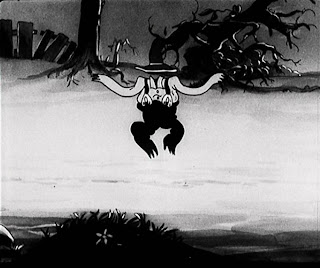 We get a scarecrow’s clothes dancing all by itself, even splitting into four separate pieces to dance side by side, in a scene reminiscent of Ub Iwerks’ work on The Skeleton Dance. There’s so much more, though. We get all sorts of fun pieces, like large spiders, similar to the ones that appeared in Hell’s Bells or Midnight in a Toy Shop. The spiders bat the cat back and forth, run along behind him and combine into one giant spider.

The final sequence features the cat being passed back and forth by a couple of sentient trees. They “eat” the cat then pull him out of their “eye,” which is really a hole in the tree. When the trees are spanking him alternately, the cat wakes from his fever dream, and returns home. 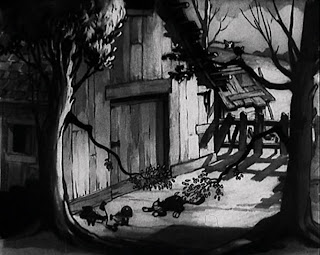 The madcap adventures of the cat after his blow to the head are amazing. It’s not especially innovative or new, but the way things flow and the fun to it is something to behold. The persecution of the cat reminds me of the way Pluto will be attacked later in the Mickey shorts in Pluto’s Judgment Day. The Cat’s Out, though, is a very good work as part of the Silly Symphonies, and deserves kudos for being different than the other 1931 shorts so far.