Blue Rhythm is kind a quandary for me. It’s a Mickey Mouse short that features all the things I’ve said here that I dislike – Mickey playing a piano, with no discernible story or plot. But you know what? It’s fun! It’s a fantastic short with great, lively music that makes you feel good when you watch it.

Part of that, I imagine, is because of the different type of music used in this short. Rather than the popular songs that have been used in some of the other shorts, this cartoon uses a more jazz/swing type music, that flows much better. It’s a breezy tune that flows through the short and gives a lively energy that was lacking in other shorts.

The second thing I like about Blue Rhythm is the animation work done on Mickey Mouse. Much like the music, Mickey has an energy about him in this short that keeps things moving. Despite the fact that Mickey is used in a variety of sequences in the short, he moves from one to the next smoothly and rapidly.

Not to mention, there are some fantastic shots in this short. The opening shot features Mickey’s silhouette on a giant scale, showing his performance at the piano. It establishes a grandiose scale and then brings things down to a smaller level quickly. 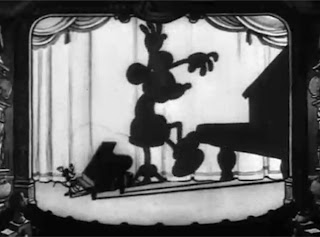 After a quick Mickey performance, Minnie joins in to do a dance, while Mickey keeps playing the piano. He reaches underneath the piano and gets gum on his glove, which leads to some funny interactions with the piano and great facial expressions by Mickey. His irritation and frustration is palpable, and is a credit to the artists. 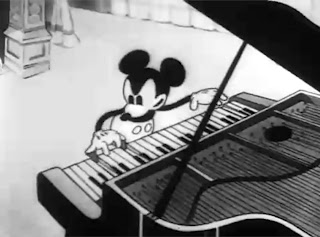 The middle section of the short is a nice band sequence, just like we’ve seen a million times before in other Mickey shorts. It’s Mickey leading a band, but this time, instead of in the barnyard, it’s taking place in a nice looking theatre on a grand stage. Perhaps that makes the difference, I’m not sure, but it’s well done. 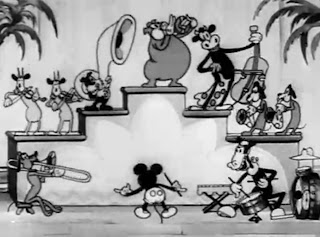 Pluto gets an interesting role here. For the first time (and as far as I know the only time) he takes on a characteristic of a human being. In this case, it’s playing the trombone, much to the annoyance of Mickey. Pluto keeps ramming his trombone into Mickey’s backside, in a quite humorous bit. 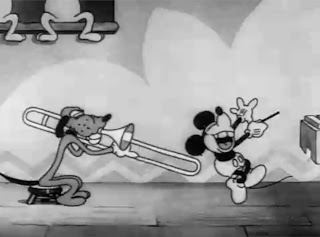 The final number is Mickey playing an instrument while doing a dance in the spotlight. Again, he transitions from the big flashy band number to the tight shot dance with ease. I don’t know if there is a different technique being used in the animation, but it seems as though Mickey’s motion is much more fluid here. Could be the music, I’m not sure. 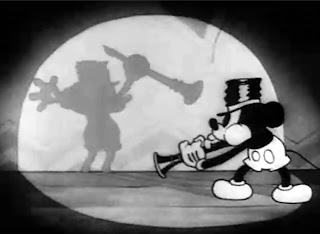 So, even though Blue Rhythm is completely not the type of short I would normally praise here, I really enjoyed it. It delivers fun in spades and is immensely entertaining. It is a credit to the artists and to Walt that there’s such fun to be had in this short.