Yesterday, in my review of Busy Beavers, I wrote about the schizophrenic nature of the Disney Studio in 1931 so far. The shorts have ranged from fast moving, gag filled romps to silly musical numbers, sometimes in the same film. That trend continues with Mickey Steps Out.

This short is really a good turn for Mickey and Pluto. Mickey’s dog is taking much more of center stage in the Mickey cartoons, to the benefit of his owner. Pluto provides some great comic relief and carries the comedy of this film. Pluto is also the main story point, as Mickey is headed over to Minnie’s house for some dancing and singing, and Pluto follows along. When Pluto arrives and finds a cat to chase, he drives the comedy of the last half of the short. 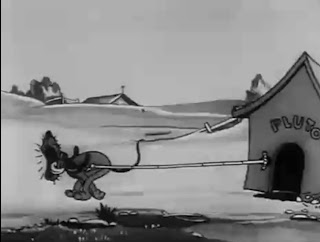 Mickey’s involvement in the short is mainly limited to doing fine dances. He starts off the short with a fun scene of shaving and getting ready while tapping a beat on the various items in the bathroom. Then he heads out onto the boardwalk (where did that come from?) and does a jig there. Finally, when he gets to Minnie’s house, he goes inside and does a dance with nearly every prop he can find. 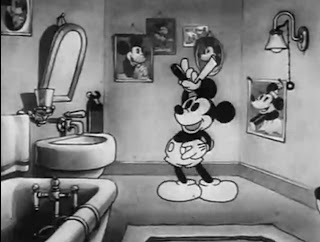 This short’s music is very much a part of its success. Not so much the quality of the tune itself, but the way that everything in the animation has a rhythm to it, more like the Silly Symphonies than most Mickeys. Mickey sets the stage from the beginning, with his routine in the bathroom, and from that point forward all of his movements as well as Minnie’s and Pluto’s are in rhythm. Not necessarily synchronized to the music, but more with a flow and a beat that keeps things lively. 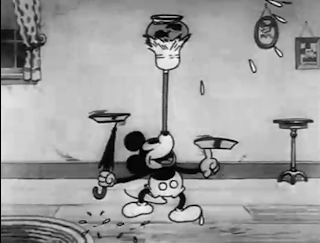 Again, there’s no real standout moments of animation here, but some good stuff does take place between Minnie and Mickey. A fine moment is when Pluto spots a cat, and takes off after it. The problem is, Mickey was standing on his back leaning in a window, and when Pluto leaves, he crashes into the window and it closes on him, leaving him hanging. When Minnie asks what he’s doing, he answers “Just hangin’ around.” It’s an easy joke, but a good one. 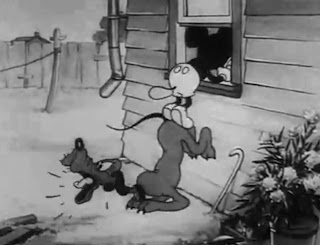 The ending of the short is part of what will become a pattern in Disney shorts. Pluto chases the cat through the house, destruction in his wake. He upends Mickey and Minnie, sneaks through the carpet, destroys the piano, crashes all through the house and ends up bringing the coal stove down on all their heads. This ending chaos is something that carries on into further Mickey shorts for many years to come. 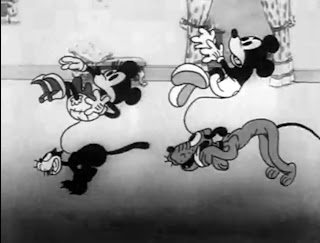 I really liked Mickey Steps Out, but it is still a little schizophrenic. It swings between musical numbers and physical comedy in broad strokes, but does as well as can be expected. It’s interesting, though, that this trend of the Disney shorts in 1931 is still continuing. Something to keep an eye on as we keep going.