The Delivery Boy is a kind of throwback Mickey Mouse short, as it features a thin framework that is really a mask for a big musical number. It’s a little change from the recent Mickeys, and it feels rather disjointed, but still fun.

In this one, Mickey plays a delivery man who has a wagonload full of musical instruments to deliver. My favorite gag of the short occurs right here at the beginning, as the opening shot shows Mickey proceeding down the road, using the piano as his bench seat. The bouncing of the road causes Mickey to bump up and down on the keys, playing a tune. It’s quite inventive. 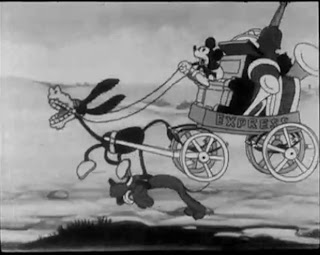 Of course, when Mickey catches sight of Minnie doing her laundry, he is immediately distracted. Mickey goes back to his early flirtatious, aggressive self here to try and catch Minnie’s attention. He jumps into her bloomers on the laundry line, sneaks up behind her, and surprises her by grabbing her tail and singing behind her. It’s a little more devious and fun side of Mickey that we haven’t seen in a while. 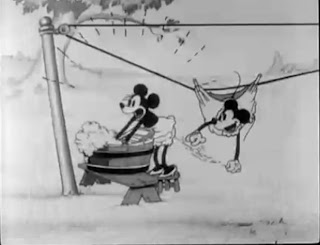 But that’s why I say this short is disjointed. Perhaps a better term would be schizophrenic. From that point forward, after a mishap with the wagon throws the instruments all over the barnyard, the short changes over to the musical style of the early Mickeys. Not only that, but Mickey himself goes back to the smiling, happy dancing character we are used to from the most recent shorts. 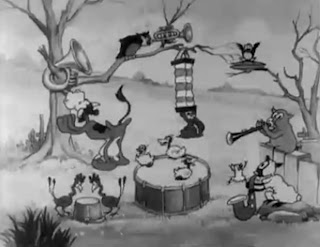 In addition, Pluto is in this short from the beginning, but has none of the antics from the last few shorts he has been in, like The Picnic or The Moose Hunt. Pluto does have a fun moment where he gets caught in tar, mimicking a dance that Minnie and Mickey are doing at the time. But for large portions of the short, Pluto disappears. 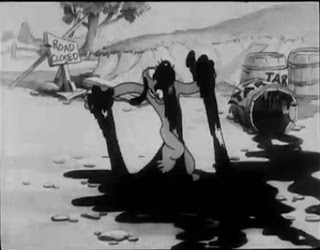 I will say that Pluto factors into the finale big time. And that’s another area where this short gets a little off kilter. This big musical number then all of a sudden becomes a story focused short, as Pluto runs off and finds Pete as part of a demolition crew. Pluto drags off a stick of dynamite that Pete has lit, and hilarity ensues. The resulting explosion blows the instruments all across the field. 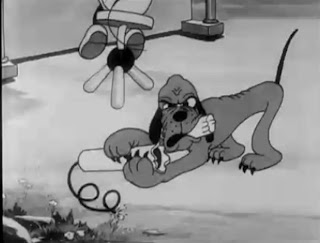 That’s quite a departure for this short, since the majority of it is just a big barnyard hoedown, similar to many other Mickey shorts. Sure, things fall back into place, making the music return, but it’s just not the same. Continually while watching this short, I kept feeling like things were switching from one form to the next. Part of this is in the animation, which is different scene to scene. That’s nothing new, but it’s noticeable in this short for some reason.

The Delivery Boy was fun, don’t get me wrong. The opening sequence with Mickey, Pluto in the tar, and Pluto chewing on the dynamite were all funny gags. But the shifts in tone and style are rather drastic, in my opinion.