I wrote yesterday about the “magic” that you feel when watching a good piece of Disney entertainment. But there’s something else that tends to fill your heart when watching Mickey and his pals, and that’s fun. In Mickey Cuts Up, Mickey manages to make yardwork fun, and that’s no small task.

Notice that I talk about Mickey as though he were a real person. That’s a credit to the animators and the work that has happened on the character since his debut in Steamboat Willie to this point. In this short, I noticed how little I was concerned with choices that the animators made (why make him do this?) and focused more on what Mickey was doing. He really is alive, and has become a character that lives apart from the drawing board. 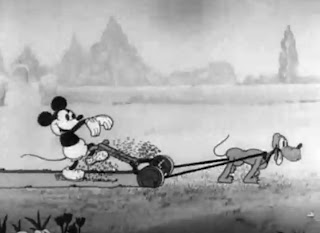 Mickey has a lot of fun here, using Pluto to drag along the lawnmower and dancing along on the back. Let me say that as someone who hates to cut the grass, I found this sequence very charming. Even though I hate cutting grass, there’s some sense of satisfaction of a job well done and the smell of a fresh cut lawn when you’re done. Watching Mickey go through this really gave him more appeal to me. 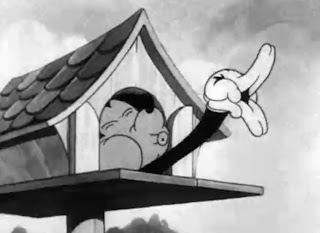 Of course, Mickey can’t help but get into some mischief, and when he sees a bird sharing a song with Minnie, he climbs into a birdhouse to get in on the action. The animation of Mickey sticking his hand out of the birdhouse to imitate a bird is very well done. The interplay between he and Minnie made me smile, as did the inevitable cat that chases Mickey off the pole of the birdhouse and into a pond.

The splash into the pond starts off another great sequence, where Mickey acts like a turtle with the birdhouse on his back. It’s a simple idea, but it’s the playfulness of his actions that make you love him even more. He dances and sings like he has done so many times before, and with such a childlike innocence that the viewer falls in love. 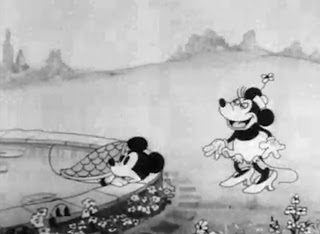 I’d have to say though, that the dance sequence that follows the turtle scene is the weak point of the short. It’s nothing new, and doesn’t add anything to the short. It’s just Minnie and Mickey dancing and playing harmonica. 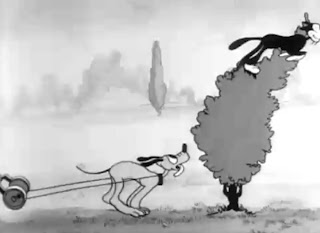 The fun ends when the cat that chased Mickey out of the birdhouse attacks Pluto, who is still chained to the lawnmower. The chase that ensues all around the yard is hilarious, with multiple instances of the lawnmower upending Mickey and Minnie, with Minnie landing on a bucket or a hose and spraying Mickey with water. 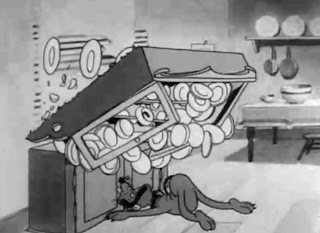 The climax is the patented chaos and destruction that is becoming a pattern with Pluto and Mickey. Pluto knocks over a set of dishes and emerges from the wreckage covered in dishes, pots and even a tea kettle. It’s the same thing we’ve seen before, but it’s still fun, just like everything else in this short.