You remember a few days ago when I lavished praise on the Silly Symphonies for having advanced to a real story based piece of work? How The Ugly Duckling was so well done and that I felt the Disney animators were now working with something special? Well, they managed to undo all that work with The Bird Store, easily one of the worst of the Silly Symphonies.

Story has been jettisoned in this short, in favor of cheap gags and quick cuts. The lavish storytelling in The Ugly Duckling gives way to chirping birds. No, I’m not exaggerating. It just seems like the first three quarters of this short is merely some birds chirping, with no real point in mind. 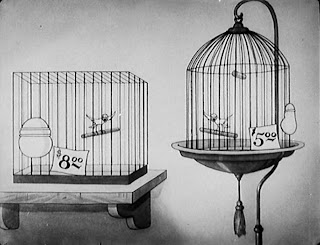 Sure, there are some gags, but they’re not particularly good, nor relevant to each other. The quick scroll past the lovebirds where one set is chirping in love to each other, while another set has one bird chirping to one in an adjacent cage while its mate cries is a good gag. But that gag goes by in about five seconds, while we move on to others. 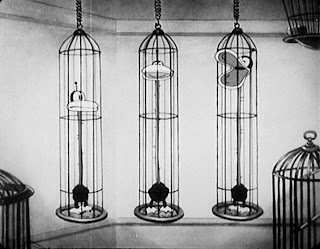 We get to see a wide variety of birds, some imaginative and some not. The birds that look like natives from Cannibal Capers are interesting, but the beginning of the short features some simple birds that do a little dance, which is repeated on a larger scale later on in the short with some multicolored birds in a larger cage. 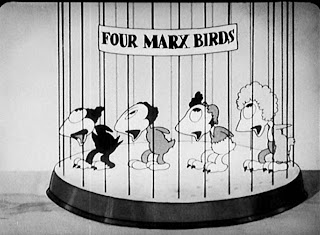 There’s just no originality or artistry to this short. There’s no characters, only quick scenes of birds in cages. The only character to stand out is a parrot, who takes over about a minute of the short, pacing back and forth out of his cage, answering the phone, and killing some bugs with a typewriter. This same parrot shows up later on in Mickey cartoons, so it’s a decent design that was looking for a better vehicle.

Our friend the cat from the 1931 Mickey cartoons shows up for the final sequence of this short. First, a small canary is trying to learn to chirp properly, and when it finally does so, it falls out of its cage into a bag of seed. 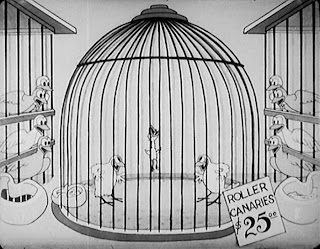 The cat manages to enter the shop, and chases the canary about. From there, it’s a similar sequence to what we’ve seen in other shorts, as the birds break loose and torment the cat. They manage to stuff him into a cage, launch him through the roof and he ends up on a pole in the middle of a dog pound. That part is good, but for someone who has seen many of these Silly Symphonies, it’s nothing new. 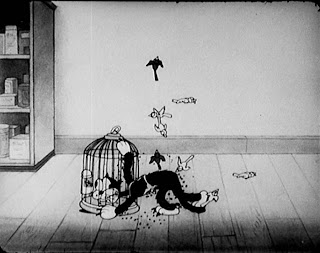 It really seems as though The Bird Store was a deadline short, as in one that was running close to deadline and had to get out the door. Backgrounds are nearly non-existent, and most of the scenes are just quick snapshots, not any kind of character work. It’s not the finest work by the Disney Studio, and probably my least favorite Silly Symphony so far.