I’m not really sure what to say about Busy Beavers. It’s a Silly Symphony, to be sure, but it’s just not that appealing to me. It really opens up a larger discussion about the way things are going in 1931 for the Disney company.

1930 was a transition year, no doubt, for the Disney Studios. Losing Ub Iwerks and Carl Stalling was a big blow, and required a change to the production schedule. In rushing to fulfill their contract, the Disney animators put out some subpar work, although they managed to squeeze in some gems in the first few months of 1930. Eventually, though, they got their sea legs, and were cranking out very solid films towards the end of the year. Shorts like The Picnic, Midnite in a Toy Shop and more gave us some memorable moments. 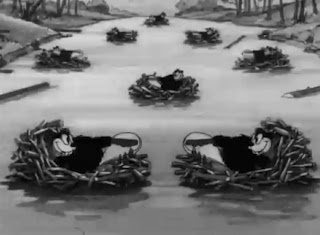 But so far in 1931, the shorts have had a rather disjointed feel. Busy Beavers continues that. While Mother Goose Melodies and Traffic Troubles are standouts in early 1931, the rest of the 1931 shorts are nowhere near as good. This inconsistency is strange, and it continues in Busy Beavers. 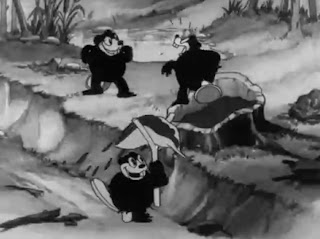 This is a classic Silly Symphony, in that it features a lot of silly gags of the beavers building their dams, set to a lively tune, without much of a plot. To the extent that there is a plot, it centers on a small beaver that manages to save the valley from a large flood. His heroics are the real fun part of the short. 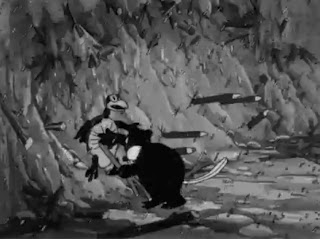 However, the overall feel of Busy Beavers is a loose collection of characters that all look the same. For me, the design of the beavers was not good. That’s just my opinion, but they are not appealing, and they don’t have any idiosyncrasies that make them stand out. If you’re going to have a short with such a lack of recognizable or individual characters, you need the gags to really stand out, and they do not do so here. 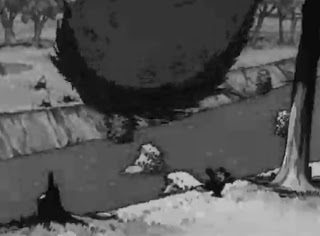 The best animation in the short is really the flooding scene, where a cloud opens up and dumps rain into the valley where the beavers have built their dam. The animation of the water rushing through, coming straight at the camera, is quite good. 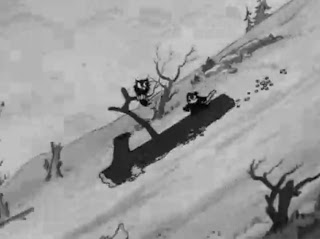 Mostly, though, we just get scene after scene of the beavers doing work, building their dam. Sure, there are some inventive ways that they do so, like loading up their tails with lumber, skiing downhill on a tree, or sharpening logs into spikes that they pound into the riverbed. But there’s no character here for the audience to take up with or follow, so it makes the short less than it could be.