I have to admit it, I am an Anglophile. At least I think I am. I love all things British. So if that is not what that word means, then please forgive me. So it should be no surprise that I thought The Fox Hunt was a particularly good Silly Symphony.

The premise of using an old style British fox hunt as the subject for a cartoon is one that we have seen time and again in animation. There’s even a Donald/Goofy version of this short that shows up later in our viewing. But the reason its used so often is that the act involves such great humor. 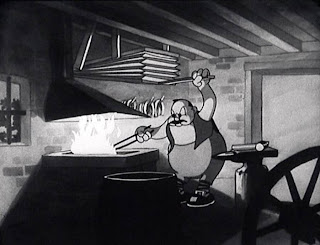 Simply releasing a fox and having aristocrats chase the fox on horses is absurd enough, but throw in a pack of dogs assisting and you have several opportunities for gags. This short takes advantage of those gags in spades. It’s fast paced and funny from the moment the horn is blown. 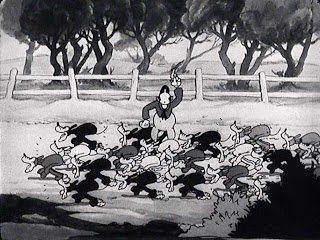 The problem is, the horn is blown too late in the short. It’s almost halfway through the short when the fox hunt is kicked off. The first half of the short is taken up with the hunters gathering outside a blacksmith shop, or being seen in silhouette on a local hilltop. 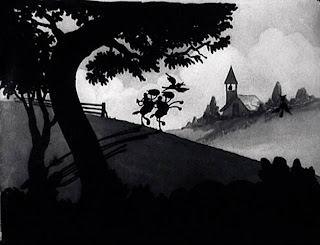 While these are interesting shots, they don’t add to the experience. It’s the type of expository sequence you would expect in a longer film. If you recall, there was a similar set of exposition in yesterday’s short, The Barnyard Broadcast. This is what made the Warner Bros. shorts so fun, is that they gave you a quick premise and then started straight into the gags. The Disney way is possibly better storytelling (although that is debatable), but it makes the shorts a little less fun.

However, when Disney gets into features, you could see the groundwork being laid in these kinds of shorts. Nothing here is a gag for a gag’s sake. Even once the fox hunt begins, the gags feature characters involved in the pursuit. Take for instance the aristocrat who ends up getting knocked off his horse and onto a succession of different animals. He moves from a cow, to a pig, to a porcupine and finally to a log on the back of several of the hunting dogs. 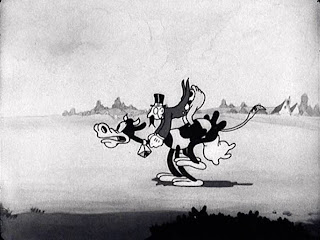 The difference is, this man is the main character in this part of the short, and his pursuit of the fox makes all the difference in the ultimate outcome. He is the one that all the other hunters gather around at the end of the short, when he has the fox trapped in a log. When he ends up pulling out a skunk instead, it gives a fun ending to the proceedings. 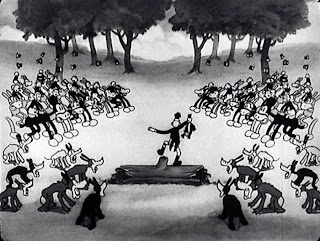 The animation in this is rather crude by Disney standards. Most of the action takes place from a distance, with details of the characters not identifiable. Even when we do get close ups, the characters are rather bland. That said, there is great humor in this short from the gags mentioned before to the actions of the blacksmiths getting ready. In all, it makes for an enjoyable, if forgettable, short.