In my opinion, when you’re watching a Disney short, you should feel good at the end. The “magic” that is associated with Disney these days is probably more a corporate marketing term than anything else, but the origins of that came from the great feeling you would get watching Disney entertainment. The Beach Party is a great example of that. After watching it, you just feel happy.

Much of this short reminds me of one of my absolute favorite Mickey shorts, Hawaiian Holiday. Instead of Donald and Goofy joining the festivities in that short, it’s Horace Horsecollar and Clarabelle Cow here. But these gags are some of the best in Horace and Clarabelle’s career. 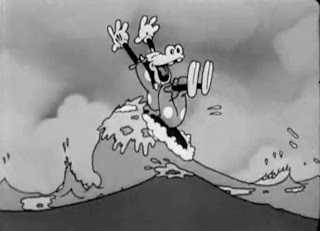 Mickey and the gang head to the beach to enjoy an afternoon of recreation, including a picnic. The fun ensues as we see each member of the party proceeding down the beach in a line. Horace and Clarabelle come first, then Pluto, then we see Minnie looking like she is wearing a huge hoop skirt. Then, we slowly get the reveal that it’s actually Minnie riding on top of a huge beach umbrella carried by Mickey. It’s a very fun visual trick by the animators. 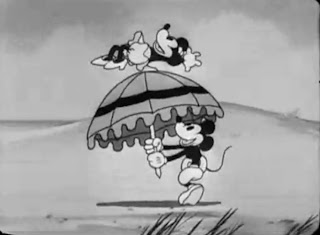 Pluto again has some of the best gags in the short. Like in the later Hawaiian Holiday, he gets into it with a crab. His involvement here is limited to some circling and a quick fight, but it’s funny stuff. He also gets to drag in the main antagonist of the short, an octopus. 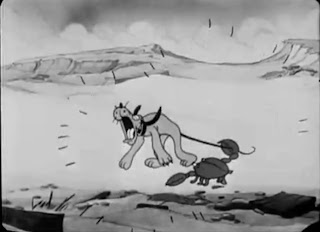 It starts when Mickey flings a chain of link sausages towards the ocean, and Pluto chases them. As Pluto dives into the water and manages to grab hold of the sausages, something pulls them back. It turns out to be an octopus rather than the sausages! The octopus quickly scampers onto land, menacing the beach party. 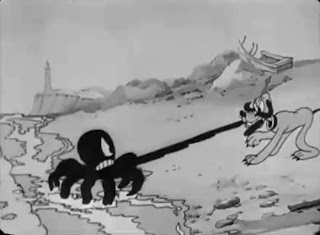 The resulting food fight with our heroes attacking the octopus is hilarious. Clarabelle serves as a cannon, getting jars loaded in her throat that she fires at the octopus. The others throw all sorts of various items at the octopus, in a futile attempt to cause retreat. Mickey finally saves the day by throwing an anchor over the octopus’ head and catching it with the tail end of the rope attached to the anchor. 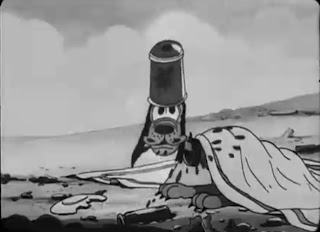 That’s just a few of the gags. There are many, many more. Clarabelle gets her rear end in a tube, then loses her bloomers. Horace dives into the water as it retreats and hits his head. Pluto drinks coffee trapped on his head. All of it makes the whole short really funny and a great example of fantastic Disney animation “magic.”