The Moose Hunt is on the Mickey Mouse in Black and White DVDs, but it should really be classified as a Pluto short. This is the first time we see Pluto specifically named, and he steals the show. The animators clearly had a good time playing with this new character, as evidenced by his popularity over the next few years.

The story of this one is a good one. Mickey and his trusty sidekick Pluto are out on the trail, searching for wild game to shoot. It’s a simple construction that allows for several pleasurable meanderings from the main premise. Whether it’s Pluto trying to rid himself of fleas, playing with a scarecrow or stumbling upon a moose, it all fits together nicely. 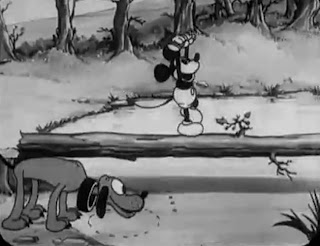 Notice that I didn’t say Mickey did any of those things. In this short, Mickey is really a bystander, playing off of Pluto’s antics. If you’ll recall, Leonard Maltin said on the DVD introduction that eventually, the animators grew tired of Mickey, because he could not do a whole lot. Being an icon can be restrictive in that way. So, they started relying more on his supporting cast to carry the gags. This is really evident in The Moose Hunt.

What’s interesting about Pluto is that there is still no consistent design. In one sequence where he is seen up close, sniffing around a tree, he looks very much like the original design from The Chain Gang. However, for most of the short, Pluto looks much closer to the dog we know and love from his own cartoons or in the parks today. The old design has droopy, bloodhound cheeks, where the new one is more rounded and friendly. 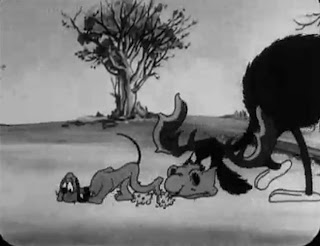 There are some great moments in this short, playing gags that seem very familiar today, but at the time were likely quite inventive. One of the best is when Pluto is playing fetch with Mickey, and picks up a long stick that has branches on the end that look like antlers. Mickey sees the shadow bouncing along the terrain and shoots at him. When he discovers what he’s done, Mickey starts weeping over Pluto’s body. Of course, the gag is that Pluto is fine, looks up to watch Mickey, then plays dead some more. A funny bit that would seem old today, but holds up well in this short. 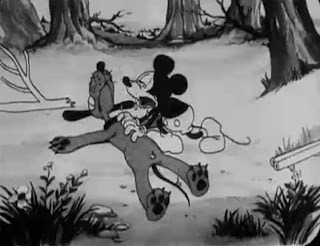 There are more, including the final sequence, when the moose is chasing Mickey and Pluto through the woods. They run straight off a cliff, Mickey standing on Pluto’s back, with Pluto flapping his ears to fly away. It’s a gag that would be the basis of a movie (Dumbo, anyone?), but it plays very nicely here. 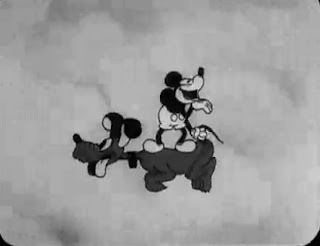 My favorite part of the short, though is the innocence of Pluto. I understand now what Maltin was talking about when saying that Mickey was limited. Pluto acts just like a dog when he encounters a scarecrow, sniffing around it carefully, waiting for his moment to pounce. Mickey could not have done this, as we would expect him to be more sophisticated. But Pluto’s innocence allows for a new range of gags. 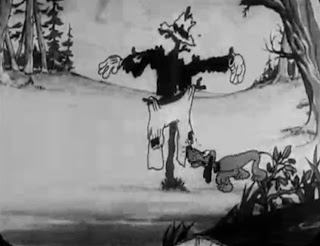 The Moose Hunt really shows the direction that the Mickey cartoons are heading. Mickey is the framework for the side characters to do great and funny little bits. This would really come to fruition in the color shorts, like Lonesome Ghosts or The Clock Cleaners, but it starts back in 1930-1931.