First of all, my apologies for not posting last Thursday and Friday. I was traveling and had some issues, but I will attempt to make up for it. That said, on to today’s review!

Fishin’ Around is part of what seems to be a growing format for the Mickey Mouse shorts. The basic idea is that Mickey is engaged in some sort of pursuit, in this case fishing, and is frustrated by outside influences, in this case the fish, while he and his companions endure endless gags. It’s a formula that will be repeated over and over, and it’s the stuff that good stories are made of. 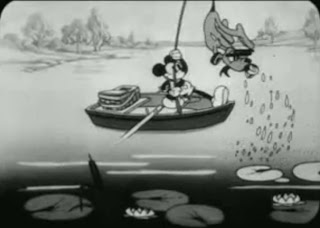 There’s a little bit of the rebellious Mickey in this short, as he and Pluto row out into the lake and stop at the “No Fishin’” sign to drop their lines. Mickey even goes so far as to submerge the sign itself with a pair of horseshoes. That’s a little more of a mischievous streak than we’ve seen in Mickey in some of the other shorts of this time.

The animation in this short is quite good, with some very well done effects and personality work. The first instance of this is the opening scenes of Mickey and Pluto rowing through the water. The reflections of the two in the water, then interrupted by Mickey’s oars or fish jumping over them is a great piece of work. It goes unnoticed because people are focused on the characters in the boat, but that great detail work is part of what separates Disney from other studios. 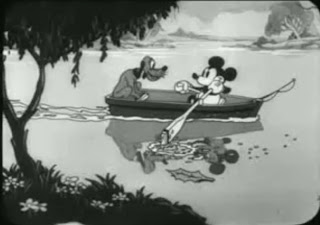 The personality work shows up very clearly when Mickey is fishing. He constantly gets thwarted by the fish, leading to some great gags. The fish pop up out of the water and blow raspberries at him, and Mickey even manages to hook himself. His body language and facial expressions in these instances make the viewer believe the little guy is alive, not just a cartoon. 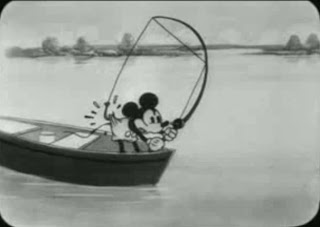 Pluto plays a vital role here as well. He engages in some fishing, dipping a line off his tail into the water, and chases the fish to the bottom of the lake. In fact, he follows the fish down and the animation is reused from his first appearance in The Chain Gang. It’s still fun, though, because of the effects of the water and the absurdity of Pluto sniffing a bloodhound trail on the bottom of the lake. 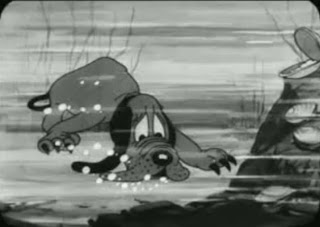 The finale comes when a sheriff notices Mickey in the “No Fishing” zone, and confronts him. There’s some fun interplay there, as the boat takes off with Pluto’s tail serving as a motor, while the sheriff tries to zoom after them paddling a log. 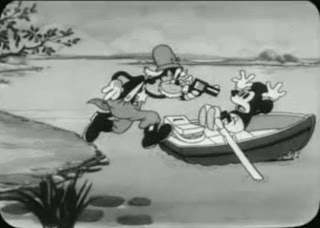 Fishin’ Around isn’t high art, but it’s fun. That seems to be the current mode of these Mickey shorts in 1931, though, simply to have some fun. And that is accomplished here in spades.