The main thing that stands out to me from Egyptian Melodies, the latest Silly Symphony, is the amazing camera work and movement throughout the short. I could be wrong (I often am), but it seems as though this short is a definite departure in the way that the Disney shorts have been shot in the past.

There are several moments in the short that are different than what we have seen in previous shorts. The opening shot of the Sphinx pulls into a tight shot of a large spider outside the door. As the door opens, the spider turns to the viewer to beckon us in, inviting us to the party. That breaking of the fourth wall is something different for Disney. 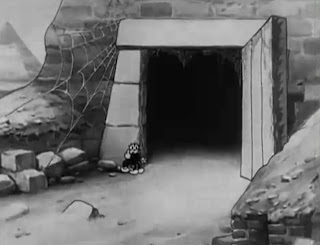 The next thing that really struck me is the movement through the hallways of the Sphinx. I know it’s not a great comparison, but it struck me very much like the movement you would see in a video game, like Tomb Raider. The camera follows the spider in one long, continuous motion, around corners and down slopes. But the camera acts like a set of eyeballs, not making cuts or motions, instead flowing with the movements of the hallways. It’s a fascinating bit of work. 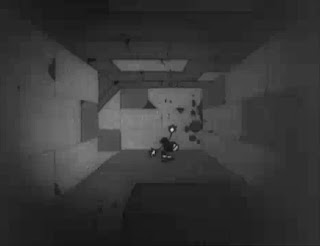 Once the spider arrives in the burial area, it’s not that much different than other Silly Symphonies. We get a nice scene of four mummies coming out of their sarcophagi to dance in the patented four wide sequence. Their dance is fairly straight forward, and probably the least compelling part of the short. 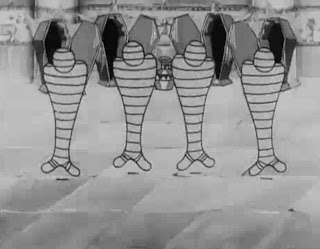 The next section, that takes up most of the rest of the film, features the drawings on the walls coming to life, to run throughout their strips on the wall. This is another sequence that stands out, because the temptation might be to have the characters come to life and leap off the wall to have more range of motion, but the animators chose instead to keep them two dimensional and flat on the wall. 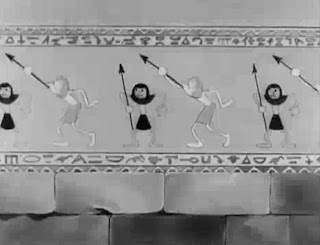 Doing this allows for a more “realistic” depiction of the characters, and leads to great gags like the chariot race between the black and white characters. There’s even a gag where one of the marching soldiers marches right off of a corner, then has to correct himself and stick back to the wall.

The final dizzying shots of the spider reacting in horror to the motions of the wall figures is amazing. We get to see the spider at various angles, fading in and out of scenes, and swirling all around. It’s a chaotic symphony, that aptly accomplishes the sense of fear and insanity that is flowing all around the spider. 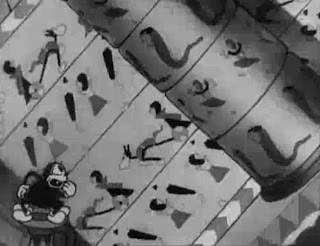 For me, Egyptian Melodies is a stand out. The amazing use of varying camera angles and the long tracking shot at the beginning of the short distinguishes it from the other Silly Symphonies. Combine that with the character of the spider and the fun of the mayhem in the tomb, and you’ve got a great short.