The Spider and The Fly

One of the things I’ve often said is lacking in the Silly Symphonies so far has been a clear protagonist/antagonist conflict. Most of the time we have an introduction to a situation, where we get some dancing, playful gags, etc. But in The Spider and The Fly, we have a fantastic example of clear conflict.

As you can imagine, the conflict is between a villainous spider and a fly, but in truth, it’s more about the community of flies attacking the spider. We start out in an unoccupied house, where the flies have taken over. It’s much like scenes from Alice Rattled By Rats or When The Cat’s Away, only substituting flies for the rats in those earlier shorts. 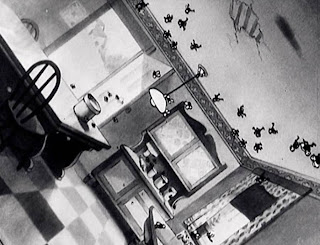 The fun part of this opening is that we start on a tight shot of a fly dancing, then widen out to see that he’s upside down on the ceiling. The shot shows the entire room upside down and the flies right side up, then rotates around to the opposite way. It’s a very effective way of literally turning the viewers’ expectations upside down.

From there, we single out a small fly and his female companion, who head outside to cavort together. The evil spider shows up, though, showing obvious menace from his first appearance. This is a great example of good design, as the spider is an obvious villain, which acclimates the viewer to how things will go in the rest of the short. 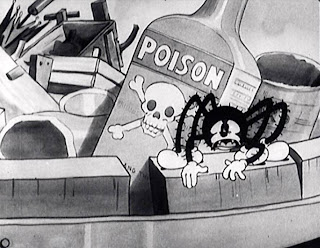 The real action begins, though, when the spider traps the female fly. At that point, the male rallies his brothers, and all out war is declared on the spider. The flies conduct a military style campaign to attack the spider and release the female fly, and their methods are both effective and hilarious. 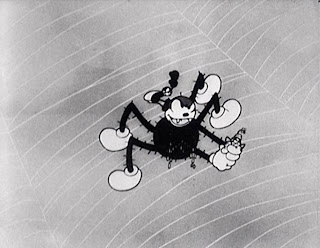 From the obvious puns of the flies riding horseflies to attack, to the bombing of the spider with pepper sacks dropped from dragonflies, this is some of the most inventive pieces of work I have seen from the Disney animators in the 1931 shorts. It’s just really good, funny stuff. 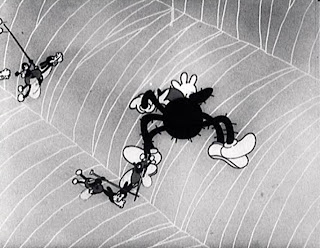 Again, though, we see a war motif here, like we have seen in some of the other shorts. Walt definitely drew on his experiences from World War I in his work, and it obviously influenced his thinking later as World War II hit the studio hard. It’s fun to see here, but will be a different tone in the wartime shorts. 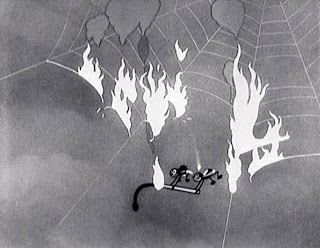 The finale comes when the flies burn the web, and the spider flies off into a section of fly paper. It’s a fun ending to a fun time. The quality of the flies and their companions is not good in the animation, but it doesn’t matter. Similar to The Fox Hunt, the point is not the characters but their movements together, so there doesn’t have to be a ton of detail added to each individual. They are more than the sum of their parts, and that makes The Spider and The Fly as good as it is.