Silly Symphonies have often been talked about as the place where Walt Disney let his animators try new things and experiment with the animation form. Innovations like the multiplane camera and Technicolor started in the Silly Symphonies. You can see a bit of that starting in The Clock Store. 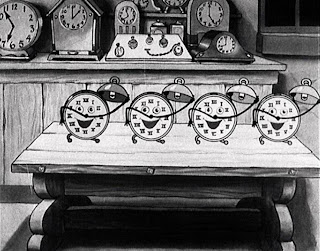 The thing that stuck out to me on watching The Clock Store is the sophistication of the figures. Sure, there is the simple, fun silly dancing that most of these shorts have contained. But there are also a couple of sequences that show some very amazing, lifelike figures, the most detailed and human looking figures to date.

The first of those is the set on the clock that does a fine ballroom dance. Not sure if it’s a prince or princess or what the characters are supposed to represent, but in the majority of their dance, they are stunning. The characters move with grace and poise, and have realistic flow and movement unlike anything that Mickey or Pluto have done. This is clearly a first step towards the human figures that will dominate the features, like Snow White herself. 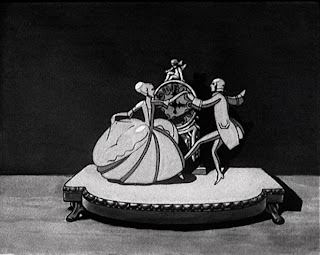 The second set of figures is no less impressive. A little Dutch boy and girl dance on the front of a clock. When the boy turns to face the camera, his rounded face and clear expressions are better than the cartoon looks we have seen in the past. While not as “realistic” as the previous set, these two people look like just that, people. 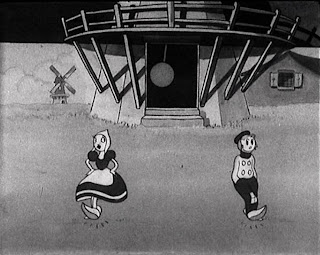 That aside, The Clock Store follows in the tradition of Midnight in a Toy Shop, in showing a glimpse of life “behind the curtain,” so to speak. It takes us into the clock shop and we see what happens after hours. That’s a tradition that keeps up time after time in Disney storytelling, all the way through the Pixar films like Toy Story. 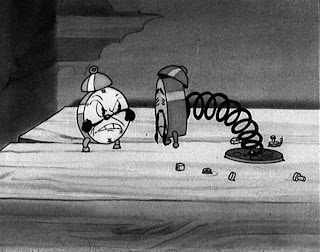 And just to show that you can’t un-watch things, the first thing I saw in this film, the old man wandering the street lighting lamps, reminded me of Dumbledore from the first Harry Potter film. It almost made me wonder if the filmmakers of Harry Potter saw this short, because the scenes are so similar. I doubt it, but it’s interesting to wonder. 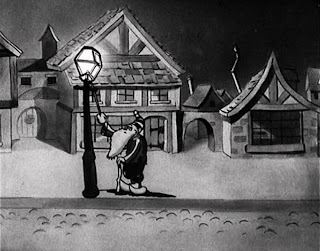 The Clock Store to me, is an example of Disney animation at its finest. It shows the skill of the animators at creating amazing characters. It also allows them to have fun and diverge into silly dances and fun, playful characters. It’s kind of a “have your cake and eat it, too” type of short.