Goofy has only had two shorts of his own to this point in 1941, Goofy and Wilbur and Goofy’s Glider. Each one took very different ways to approach the character. In Goofy and Wilbur, he was played as he normally was in the shorts, whereas Goofy’s Glider was a “How To…” short, where a narrator read off the correct way to do things while Goofy demonstrated the opposite. Which style would Baggage Busters take? 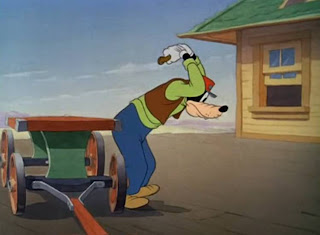 Just like Donald’s Ostrich, where Donald was confronted by an unexpected situation at the platform, here Goofy meets his match with a magician’s trunk. The trunk is supposed to be loaded onto the next train, but Goofy, in classic form, accidentally drops it, and the trunk opens. 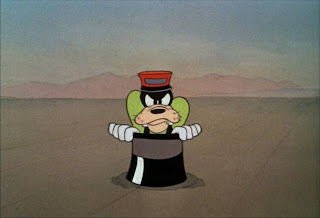 This short is one that takes the device of the magician’s trunk and uses it to its fullest. The idea is established early on that pretty much anything we can think of will and can come out of the trunk, and from there, it’s open season on Goofy. It starts with a traditional rabbit popping out of a hat, which is fun enough, but goes way further. 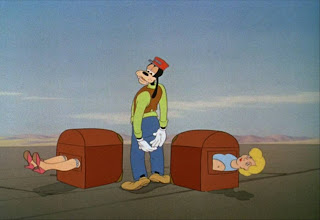 That’s something I respect about the animators here, is that this could have been a simple case of taking the rabbit and mixing it up with Goofy. Instead, they worked this short a little more, and took the character to heart. Goofy is not someone who’s going to work well with one thing bothering him and causing frustration, like Donald. He is a character that is easily distracted, so you have to provide him with those distractions to keep him funny. 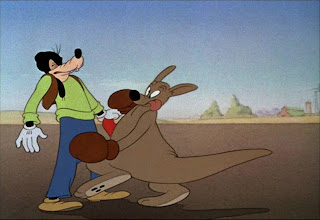 There are so many gags that come one after the other in this short. A bull pops up out of a handkerchief, a kangaroo appears to start punching Goofy, and a menagerie shows up out of nowhere, disappears back into the trunk then reappears. It all moves quickly, but is very, very funny. 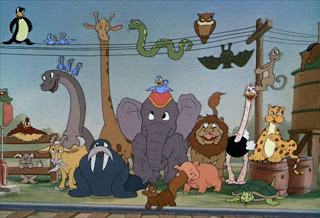 Goofy’s shorts are my favorite of the main Disney characters, and the reason is that I think they are the funniest. Donald’s are quite good, and Mickey’s may be better artistically, but Goofy shorts are just fun. Baggage Busters is a good example of how to use the character without the “How To…” set up. It’s a fun, quickly paced romp that leaves you wanting more.