Ah…classic Mickey. It’s like slipping on an old comfortable robe and letting the warmth just snuggle you tight. Really, this is a classic era of Mickey shorts, even if they are few and far between at this point. The best Mickeys are most likely in the past, but the ones being produced in the late 1930s and early 1940s have some classic imagery and great characterization of Mickey.

The Little Whirlwind is one of those that you’ve probably seen, you just didn’t know it. It starts with a familiar gag to anyone who’s watched cartoons – Minnie bakes a cake and sets it in the window, then the smell wafts out and literally picks up Mickey and floats him along to the window. I know I’ve seen it in Looney Tunes shorts as well, but it’s still funny. 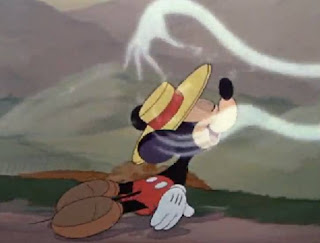 Mickey peering in the window at the cake is some of my favorite animation of the short. The ripples and effects of his ears and head swelling and shrinking through the glass of the window is ingenious. It serves to make an already sympathetic character even more so, just through the use of gestures and some fun visuals. 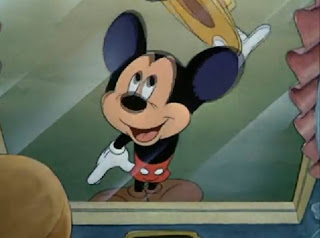 The deal is struck that Mickey will clean Minnie’s yard in exchange for the cake. Here is where the titular problem enters the picture. The whirlwind blows through the yard, disrupting Mickey’s efforts to clean up by moving his leaf basket, spewing things around the yard, and generally causing mayhem. 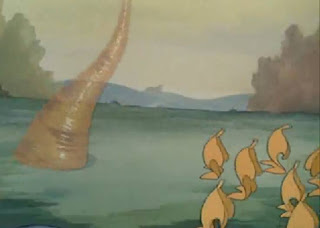 What I love about this short is the way things build upon one another, over and over again. The whirlwind first starts with small tricks, then develops an “army” of marching leaves, and eventually ends up as a huge tornado, sucking up the entire countryside. No matter what Mickey tries, the problem keeps getting worse and worse. 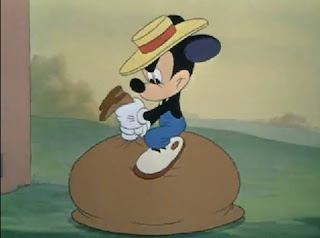 It’s an interesting choice to have Mickey in this short, because you’d normally associate Donald with something like this. I could easily see Daisy having baked the cake and Donald trying to get it. It would have been a very different short, though, because Mickey deals with the situation with a mixture of irritation, smiles and fear, depending on what he’s presented with at the time. 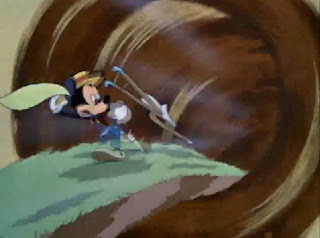 The end sequence, with Mickey perched in the fountain and Minnie glaring at him because of the mess the twister made is very funny. It’s a classic image of Mickey on the fountain, and his smile even when the cake ends up on his head kind of sums up where the character is very neatly. Mickey’s always going to try his best, but if things don’t go his way, he’ll shrug his shoulders, chuckle and keep going. That’s part of what we love about him.