Since Mickey Mouse became a big star, Disney was very hesitant to put him into roles that might be less than flattering. For the most part, Mickey was there to direct the action, like in the trio shorts or with Pluto. In A Gentleman’s Gentleman, however, Mickey doesn’t come off in the most appealing way.

The short is about Mickey spending the day in bed while Pluto waits on him hand and foot. No, really, that’s what it’s about. Mickey wakes up and “summons” Pluto to bring him breakfast, and has the poor dog schlepping a tray, pouring coffee and the like. I think the attempt here was to make it look like there was a joke going on, where Mickey was playing the aristocrat and Pluto was playing along. However, it came off as sort of cruel to me. 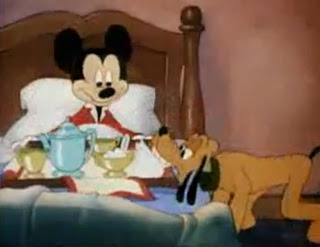 This is really just a set up for having Pluto run out of the house. Mickey gives him a quarter, and sends Pluto into the world to fetch the paper. Hilarity ensues.

Pluto faces a few obstacles in this short, not the least of which is the fact that he’s a dog! Imagine a dog trying to hold a quarter in his teeth and then go put it into a newspaper stand. If you are laughing at the thought, you get the idea of what was so funny about Pluto trying to do it. He ends up losing the quarter, having trouble picking it up with his teeth, and loses it down the sewer. 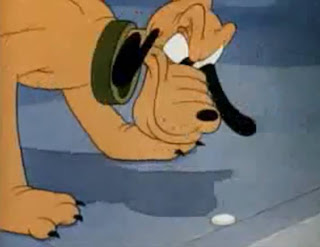 The solution is, of course, to stick gum to the end of his tail and fish the coin out of the sewer. Because what could be more obvious? 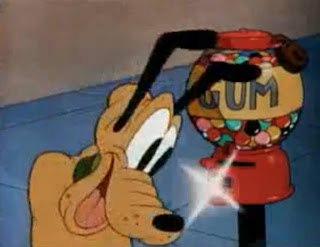 The part of the short I find particularly amusing is the next sequence, where Pluto is walking down the street, paper clutched in his teeth, and nose stuck in the air. People are lauding him for how well trained he is and what a good dog he is, and he swells with pride. And then right after he falls over and drops the paper. 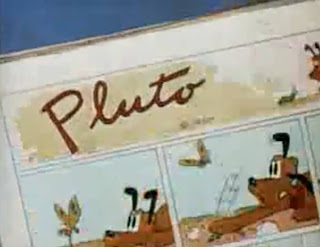 It gets even better though, as he sees a Pluto comic strip in the paper, which shows him ending up covered in mud. Pluto laughes, but after a breeze blows the paper away, he ends up in the mud, just like the comic strip. It’s a funny case of Disney sort of breaking the third wall, and acknowledging that these are characters in a cartoon universe. 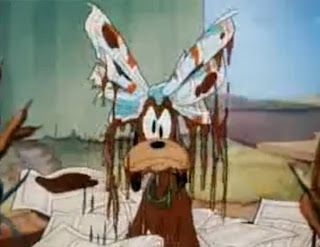 When Pluto returns with his muddy self and the torn up paper, at first Mickey is very mean to him. Apparently, though, someone realized that made the unsympathetic Mickey even more so, and he laughs the whole thing off. It’s just a weird dynamic, as we’ve seen Mickey get onto Pluto before, but never treat him as such a slave. Even though Pluto is very funny in this, it’s still very strange.