With some context behind us, we can start into the actual films of 1941, beginning with Timber, a Donald Duck short that matches him up with Pete. It’s a rare pairing, which is surprising, when you consider how much Donald is associated with the Beagle Boys, who are artistic descendents of Pete.

Donald, as he is wont to do, is wandering through the forest, possessions tied up like a hobo in a handkerchief on a stick. Donald seems to move in two modes in his recent shorts – either as a suburban man or a wilderness explorer. Consider his exploits in Donald’s Vacation or Good Scouts as examples of the latter. 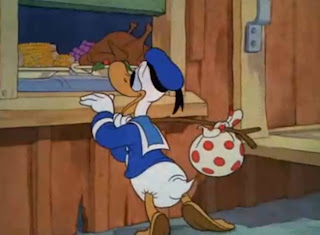 Donald makes the mistake of trying to steal Pete’s food from an open window. This is a gag that’s not all that original, nor is the result. Pete sticks a piece of dynamite in Donald’s hand, leading to a very funny shot of the “exploded” Donald outside the window. 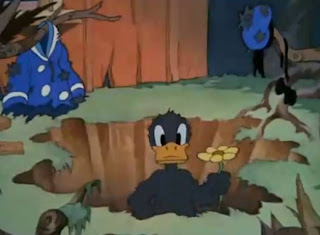 Where the short turns for the better, though, is when Pete decides to make Donald work off his debt. Here, we get to see Donald at his lazy best. We’ve talked a lot here about how Donald works best when he’s angry or frustrated, and his anger builds throughout the short. But there’s one more scenario where Donald works well, and it’s when he’s the flunky trying to avoid work. 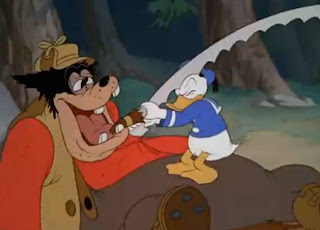 Donald is lazy. No two ways around it. Think about some of the shorts we have seen already, like Self Control, where he was trying to lay around in a hammock. Or even his last team up with Pete in The Riveter, where he tried to work around actually working. That’s a place where Donald is the most fun, because, let’s face it, many of us can relate to that!

Donald tries a few things to get out of work, like breaking the axe or trying to lose the saw. The harder he tries to get away, though, the more he becomes embroiled in the process with Pete. It’s a great lesson, because if you’re like me, you’ve tried to get around work, but it always ends up making things worse, not better. 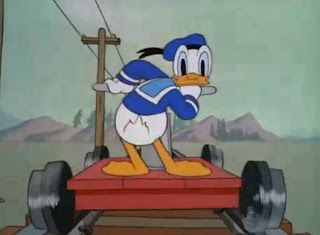 The climax of the short is a high speed chase over the railroad tracks, with both Pete and Donald on handcarts. I cannot do justice to this sequence in a description, because things fly by so fast and furious. Pete and Donald’s handcarts fly apart and they have to improvise to keep going. It’s fast moving, funny and classic Disney. In fact, it reminds me more of a Looney Tunes short than Disney, but it works for Donald. 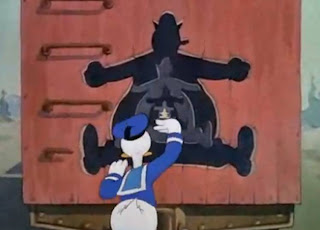 Timber is a great example of Donald being Donald, and making a great foil for Pete. He’s different than Mickey, in that Mickey was trying his best, but ended up failing, while Donald looks to avoid work and then improvises. It’s a classic scenario that provides great laughs, and a short that’s well worth watching.