Donald Duck can get himself in some amazingly awkward situations. We have seen that and we know it to be true. I have to say though, that the situation of Golden Eggs may be the most out there situation I’ve ever seen.

After seeing that the price of eggs is up to $0.85/lb, Donald decides it’s his time to strike it rich by harvesting the eggs in what one presumes is his chicken coop. After all, Donald leaves his own house, steps into his own yard, and begins collecting the eggs. He even puts on a faster bit of music to speed up the egg production. So where’s the problem? 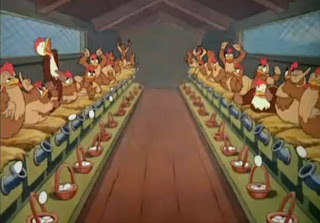 Somewhere in the middle of all this, a rooster shows up and boots Donald out of the coop. What? I get that the rooster is “in charge” of the hens, but isn’t Donald the owner of the coop? Shouldn’t he be able to kick the rooster out? 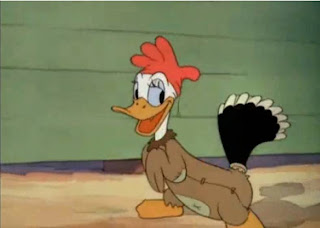 This is where the problem of having your lead character be an animal kick in. Donald, as a duck, is about the same size as the rooster, so it really seems he has no authority in this situation. Which leads to an inevitable silly solution of putting on a female rooster costume, of course. 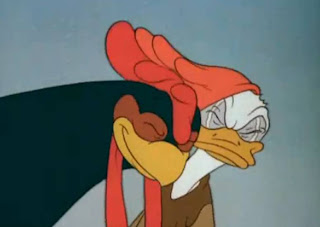 That’s the entire plot of the short, really, is Donald’s attempt to get past the rooster and capture the eggs using this “female” trick. And it’s funny watching Donald try to maneuver himself closer to the eggs without alerting the rooster to his duplicity. There’s complications of course, such as the red rubber glove that refuses to stay on Donald’s head, or the caterpillar that crawls inside the glove. 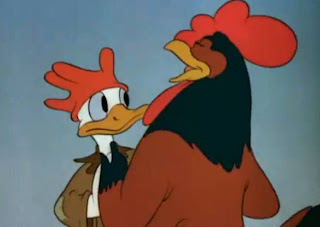 In the end, though, it was really hard for me to get past the whole “this is Donald’s house” thing. I know, I should suspend disbelief and move on, but this was just such a stretch that it was hard to overcome. Outside of that, though, the short is quite good. 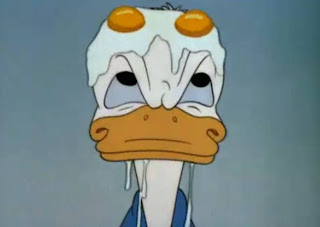 One thing I find interesting is that in the way this plays off the rising price of eggs, this is the first time that the effects of World War II are starting to creep into the shorts. It would not be until 1942 that rationing and the conservation of resources began in earnest, but prices for goods were starting to rise as the war intensified. Eventually, Disney would become much more embroiled in the war effort with propaganda shorts and more, but that’s in the future.