Don't miss my guest blog today over at TouringPlans.com, on how to do a Disney Weekend at the parks! 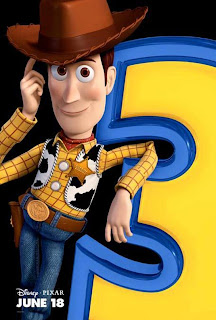 In film history, there are very few trilogies that maintain quality the entire way through. Star Wars fans laud the first two films in the original trilogy, but many dislike Return of the Jedi. Indiana Jones fans are split, but some hate Temple of Doom, while others dislike The Last Crusade. Don’t get me started on The Godfather, Part 3. It’s tough to take a really popular, well done film, and continue that quality for two more films.

Pixar was able to build off the heartwarming story of Toy Story when they released Toy Story 2. Many people today regard it as the best sequel ever produced. Those people are likely to change their tune when they see Toy Story 3. 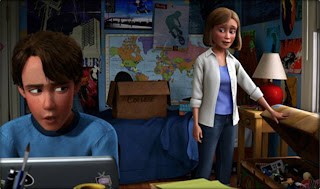 On Friday, June 18, I hurried home from work, purchased tickets to the 5:15 show, and gathered up the family so we could see the latest work from Disney/Pixar. I saw the first film in college, with a bunch of friends, including my now wife. It was around Christmas time of my freshman year, and it was one of the best times I’ve ever had at the movies. The second movie, I saw with my wife, shortly after we moved to Atlanta, before we had children. This would be the first time I saw a Toy Story film in theatres with my kids, and I couldn’t wait another day.

We settled in with popcorn and soda, and let the magic unfold. The short in front of the film, “Day and Night,” was magnificent. It really called back to old school 60s animation with the design of the characters, and in the best Pixar short tradition, made the most of its time with no dialogue, just fantastic sound effects and acting. 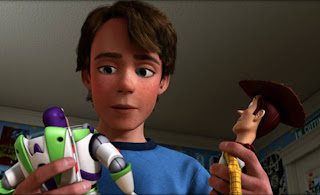 Then, Toy Story 3 began. I’m trying to make this review spoiler free, for those of you who have not seen it, so let me say that it’s fantastic and get that out of the way. If you’ve seen the trailers, you know that it deals with what happens when Woody, Buzz and friends are dealing with the fact that Andy’s going away to college. To say more would spoil it, and that’s one thing no one should do.

What I can talk about is the emotions involved in this film. The thing that sets Pixar apart from the myriad of digital animation studios out there is that everything they do is full of story and emotion. They tug on your heartstrings, but they earn it. It’s not some cheap emotional storyline, like a beloved character dying for no good reason. Never has this been more true than in Toy Story 3. 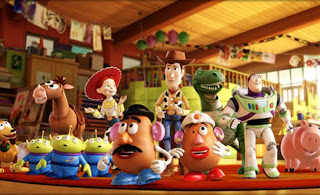 From the beginning of the film to the end, the overriding theme is regret and loss. The toys are trying to find their purpose in life, now that Andy is moving on. The story is how they do that, and what it means to their relationships to each other. We have come to care for these characters and therefore, it’s hard to watch them struggle as they do throughout this film.

In the first two films, we see confident and strong characters, but here, the toys are beginning to doubt themselves. It’s a brilliant choice, because every character in the film, even the new toys, shares those feelings. The question is how do they deal with those feelings, and the answer is what makes the film work. 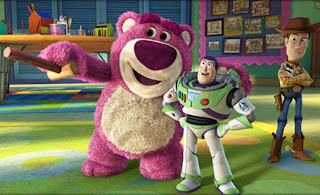 The animation in this film is on another level. If you have the chance to see it in a digital projection theatre, take it. We saw it in 2D, not 3D, but from what I understand from Twitter, you don’t need to see it in 3D at all. It doesn’t add or subtract anything to the experience, because this is not a visual spectacle, it’s a story first film.

If you have young children, be aware that this film gets dark. Very dark. It has to, really, in order to deal with the subjects it is tackling. There are sections towards the end of the film that are scary. My 3 year old daughter screamed for 20 minutes, terrified about what would happen. We were able to comfort her, but be warned that it gets scary. 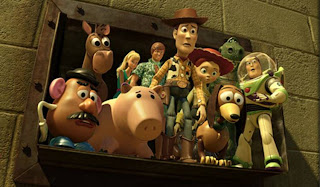 On the other end of the spectrum, this one is very funny and heartwarming. The humor comes from the usual suspects, Hamm, Rex, Mr. Potato Head and the Little Green Men, as well as some different takes from Buzz. What happens, though, is the fate of the toys, and the worry about what will happen, is going to cause tears as well. If you don’t tear up during the final sequence, you need to have your pulse checked.

Ultimately, the Toy Story movies are about nostalgia, and the love of childhood. When watching these films, adults become kids again, and kids never want to grow up. It’s a modern version of Peter Pan in that way, because it makes us all young at heart. Now that the trilogy is complete, though, there is an arc throughout that makes it one story. It’s the tale of these beloved characters, going through the full breadth of their lives, and mirroring our own. Toy Story 3 forces us to look into that mirror, and in the end, lets us know that things will hopefully turn out alright.