Out of Fantasia world today and back to the shorts, with a fun little film featuring Donald and his nephews. Fire Chief puts Donald in the title role, and gives us a lot more of what we love from Donald – ridiculous situations with things constantly going wrong for the duck, causing frustration and craziness.

As you might guess, this short deals with Donald heading out to take care of a fire. However, it opens with the boys playing a prank on Donald, ringing the fire alarm to get him out of bed and stop his snoring. It’s cute, but what is nice is that it serves as a setup for a later part of the short. It’s a nice bit of storytelling and structure. 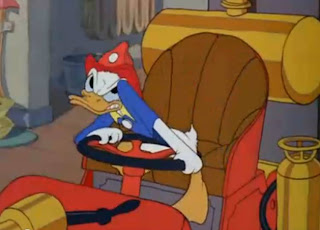 Donald jumps out of bed and slides down the pole, then zips into the fire truck before seeing the boys laughing at him upstairs. But when he goes upstairs, they’re “asleep” in bed again. The shot of Donald in the truck gets echoed later, as Donald feeds the furnace a little too full of coal, and ends up catching the firehouse on fire. 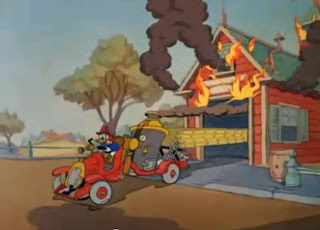 One of the funniest bits I’ve seen in a Donald short is when he pulls out of the firehouse to chase the fire, not realizing that it is in the firehouse he just left behind. It’s almost like something you’d expect from a Goofy short, but having it be Donald instead is a refreshing change. 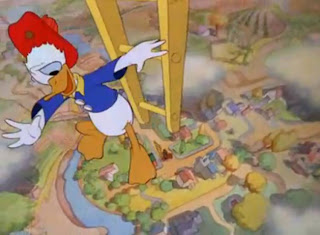 The best parts of this short, though, are Donald trying to put out the fire. The gags come quickly and are extremely funny. The first is when the boys extend the ladder, and it snaps, sending Donald off into the air. His expressions trying to climb the ladder and find a way to land safely are priceless. 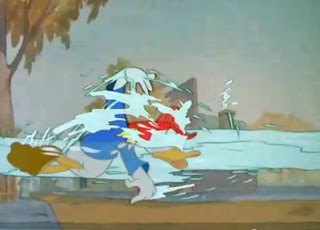 There’s so much more, too. Donald swims along the stream of the water hose, the water builds up from a knot in the hose then explodes, Donald flies into a bicycle shop and comes out pedaling a tricycle – it’s all one after the other, and all very funny. 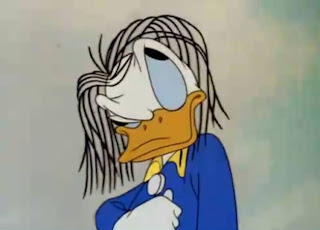 The thing I see in the Donald shorts is they feel more “modern” than some of the other types of shorts we have seen. At least that’s my feeling. I could watch Fire Chief today, on an HD television, and not think that this short was 70 years old. It seems like something that could have been produced in the last decade. It’s amazing to me that shorts like this hold up so well, but they do. Fire Chief is a great example of Donald at his finest.