The last major short from the Disney company in 1940 was a bit of foreshadowing, as Pluto appeared solo again, something that would come to be more and more of a trend. Pluto’s appearance in Pantry Pirate, though is a probably my favorite of his shorts so far. 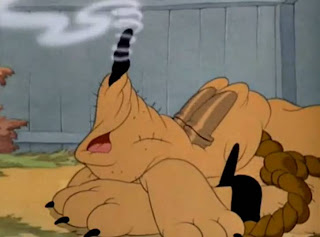 The main reason for that is because the short focuses on Pluto doing some great stuff that is typical for a dog. And strangely enough, that is not typical for Pluto. Think about his other shorts – Pluto’s Quinpuplets, Mother Pluto, etc. – they are really involving atypical behavior for a dog. In Pantry Pirate, he is just trying to get food out of the kitchen. If you’ve had a dog in the house before, you can relate to this.

It starts off with Pluto getting thrown out of the house, but he soon finds his way into the house to try and eat the fresh ham on top of the stove. It’s hilarious, because he goes through the same sort of craziness I have seen other house pets do. The first is sliding across the kitchen floor. I remember a cat doing this in my grandmother’s house, so this struck a chord for me. 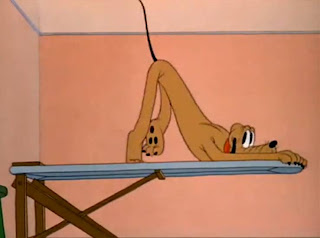 When Pluto climbed on the ironing board to use it as a platform to get to the stove, I’ll admit I laughed out loud. Remember, I watch at least one of the shorts every day, so it’s hard for me to be affected by a short like that. But this one is that funny. 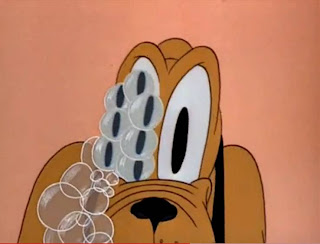 The capper is when Pluto gets caught in a box of super soap, and starts making bubbles all over the place. It’s another case where the animators pick up the pace and start having the gags come closer and closer together. We’ve seen this often in the shorts, where there are some slower gags in the beginning and then the pace picks up, building to a big climax. 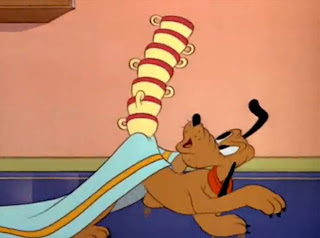 Here, we get Pluto hiccupping bubbles and juggling coffee cups with his tail trying not to break them. It’s a fantastic bit, because Pluto is trying not to alert the people in the house that he’s in the kitchen, but it’s near impossible not to drop the cups. He eventually does, which prompts another fun scene.

Pluto has to scram when the cups finally break, but he’s so excited that he’s spewing bubbles like crazy, and when he runs out the door, he leaves a hole in the mass of bubbles pushing through the door. It’s a very funny visual, and a creative gag. The only downside of this short is the “Mammy” character that is Pluto’s nemesis. It’s obviously a stereotype, which was not so bad in 1940, but these days seems offensive. If you understand the context it’s fine, but I could see some people being offended by that part of this short. Regardless, I liked Pantry Pirate better than any of the other Pluto shorts, and recommend it highly.