A Good Time For A Dime

Yesterday I reviewed Baggage Buster, and wrote about how Goofy was a character that worked best when confronted with a myriad of obstacles. In comparing him to Donald, I implied that Donald was best suited to a singular antagonist. Well, in A Good Time For A Dime, Disney seemed to look to prove me wrong.

This Donald Duck short is very similar to Modern Inventions, in that Donald travels around an exhibition hall and gets wrapped up in some crazy gadgets. Only this time, instead of futuristic items, it’s the best in the Penny Arcade. On a tangent, I truly miss the Penny Arcade at Walt Disney World and Disneyland. I used to love to try those out as a kid. Now, there’s only a few isolated machines here and there. Oh, well. 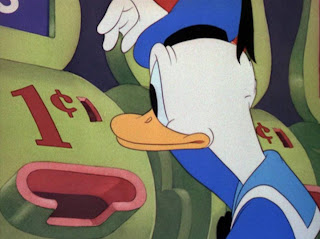 Here, Donald is headed to the Penny Arcade, and first stumbles across the “video” viewers, where he ends up finding something labeled “The Dance of the Seven Veils.” For those unfamiliar, this was a very famous clip of the time, where the stereoscope viewer would show a woman removing seven pieces of veil-like clothing in succession. It did not show anything racy by today’s standards, but was standard for the era. 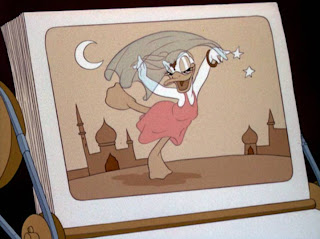 Here, we see Daisy Duck cast as the temptress, which brings her back into the fold after a long absence. I believe the last time we saw Daisy was in Mr. Duck Steps Out, when Donald came to court her. This is a different role, to say the least. It’s fun, though, because true to form, Donald’s machine malfunctions, and he sees it recover just in time to miss the last veil.

The second trial for Donald in this situation was his experience with the prize machine, or “The Claw” as the Little Green Men from Toy Story would call it. Donald tries repeatedly to get a prize, but to no avail, until he notices a magnet. Working diligently, Donald shakes the machine to the point where the claw has to get the magnet, and the magnet sucks up everything else. However, something goes wrong, and perfume gets sprayed on him, causing a sneeze that sends all the prizes away up the chute again. 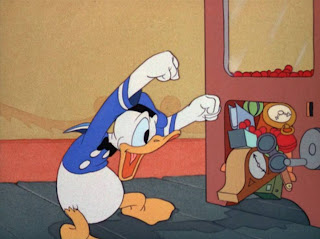 You would think Donald might quit after that luck, but no! In fact, it’s part of what makes him so good as a character – that he does not quit. Donald takes the punishment and keeps coming back, even after he’s defeated.

His final fun machine is a very, very primitive flight simulator. It’s interesting to see this attempted in the short, because it’s different than the other two machines. I don’t know if machines like this really existed back in the 1940s, but certainly one that does what this one ends up doing did not. The plane flies on its own, chases Donald and ultimately shakes him until he’s green. 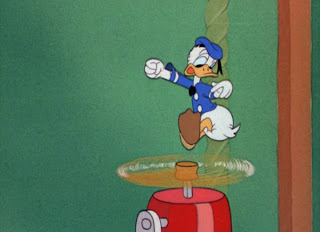 A Good Time For A Dime would not make my top ten of Donald Duck shorts, but mainly because I feel like I saw it before in Modern Inventions, and it was funnier then. That’s not to say it’s not good, but it lacks some of the punch of other, more original Donald Duck cartoons.