The Development of Fantasia

Fantasia is a project with a long history at the Disney studio, and it can truthfully be said that we have never seen the film the way it was originally intended. Very few people have, and that’s a shame. It’s a masterpiece of animation, with some of the most inventive and creative bits in any Disney film, but it’s never quite been what Walt envisioned. 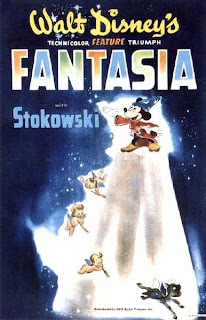 The whole story started with the decline of Mickey Mouse in the late 30s. Mickey was no longer as popular as he once was, for multiple reasons. Many of those we have discussed here, but as a huge star, Mickey had to be watered down and couldn’t be as feisty as he once was. Instead, stars like Donald Duck took off, and Mickey was secondary in his own shorts.

Walt wasn’t ready to let Mickey go, so he began designing a Mickey short around the story of “The Sorcerer’s Apprentice,” putting his best animators on the project. This work started as early as 1937. Fred Moore, one of the top men on Snow White, was given the task of making Mickey even more appealing, so he redesigned Mickey. 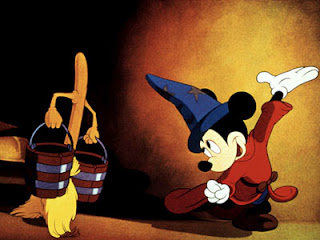 In a happy coincidence, Walt met Leopold Stokowski when work was commencing on the short, and Stokowski volunteered to do the score for him. After all the work was done and the production values raised to their peak on the short, it cost over $400,000, a sum far too large to be earned back by a short cartoon. 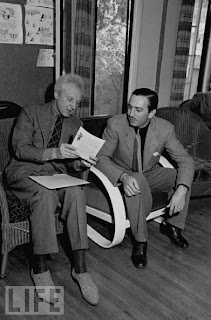 Instead, Walt began developing other shorts to go along with “The Sorcerer’s Apprentice,” to create a full length film that would serve as a concert of sorts. The idea was for the film to be shown as a traveling roadshow, with the orchestra on screen serving as the bridge between shorts. It was called Fantasia, and would be the most ambitious film Walt and his studio had ever produced.

The more he looked at the film, the more Walt wanted from it. He chose noted composer and critic Deems Taylor to be in the film as well as help pick music. Stokowski contributed as well, and a huge number of songs were considered. Walt wanted the film to be about “music you hear and pictures you see,” meaning there would be no dialogue, but the animators would be counted on to tell stories related to the music using only their visual cues. 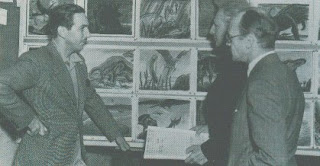 The importance of the score was underlined by the time and effort that Walt put into “Fantasound,” a stereo system designed to maximize the sound quality in theatres. It cost the company a lot of money, but was ultimately installed in only a handful of theatres.

When the short finally opened as an exhibition in November of 1940, there was no distributor and Walt was very much on his own. RKO did not want to meet Walt’s standards for exhibiting the feature. Audience reaction was mixed, and the “traveling roadshow” concept never really materialized. Walt envisioned making updates to the film over and over again, taking pieces out and adding new ones, but that never happened either.

Fantasia was Walt’s first major commercial “failure,” and it cost the company money. Sadly, it really was an artistic masterpiece that deserved better. My thought is that in trying to push the boundaries of what was acceptable in film, Walt finally pushed too far, and met the inertia of the movie theatres head on – and lost. But that does not diminish the success of the film itself, which we’ll look at tomorrow.

All images copyright Disney unless noted otherwise. All rights reserved.