Alice and the Three Bears

It would be very hard to find two shorts that are more opposites than Alice Hunting in Africa, which I reviewed earlier today, and Alice and the Three Bears. One is horrifically bad, not entertaining, and has no form or story, and the other has all of those things, and is great fun.

Alice and the Three Bears is the best animated short of the Alice Comedies so far. It’s no coincidence to me that it’s also one where Ub Iwerks was involved. The quality of the animation, the inventive gags, and the superb storytelling all speak to the work of a superior mind. 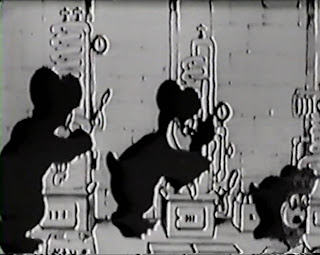 The short starts with three bears making beer in a still, quite a departure from the traditional fairy tale. That’s what you find with Iwerks films, though, is a rough and tumble approach to animation, where no niceties are observed. This is quite different from the later Disney films, so its interesting to see this in these early shorts. 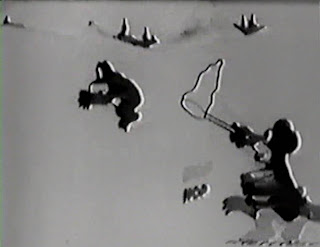 Something is not right with the brewing, though, and baby bear decides that it needs more hops. So, the baby bear chases a frog around a pond, in an inventive sequence taking place above and below the water. Finally, though, as the frog leaps away on land, the baby bear takes out a net and captures the word “Hop” as it floats in the air behind the frog. It’s a great gag and out of the ordinary for these early films. 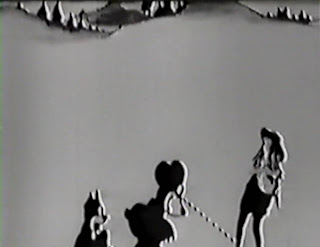 Soon, though, along comes Alice and her cat, the still not named Julius. The bear takes notice of the two, offering a rather lewd assessment of Alice, sizing her up with a direct line from his eyes, looking her up and down. This, too, is a little out of the ordinary, and somewhat shocking. It’s not what you expect from a Disney film. 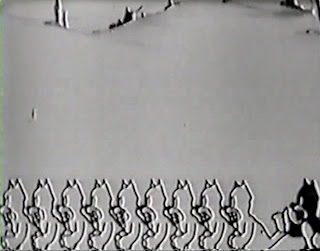 Julius attempts to defend Alice, and succeeds against the baby bear, but the baby soon calls Mommy and Daddy to help. The three bears manage to incapacitate Julius and capture Alice. So, Julius calls in the reserves, summoning his other nine lives to attack the bears. Again, a great idea, well executed here. 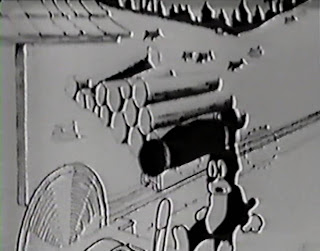 Finally, the ninth life about to expire, Julius feeds it some of the bears’ moonshine, which allows the ninth life to attack and defeat the bears. Then Julius rescues Alice, who had been tied up in a sack about to be split like a log. The short closes with Alice praising him as “My hero!”

This is a great short, especially when compared to the other Alice Comedies. The gags are extremely inventive, and it seems as though Walt turned the animators, especially Ub, loose to create new and exciting ideas. Capturing the words in a net, calling in the nine lives and even the lewd look from the baby bear are all great inventions. This is the kind of product you expect from Disney, and it’s very cool to see it develop slowly through the creation of these Alice films. Only time will tell if the quality continues to build, as it has from the first three Ub Iwerks films, or if the inconsistency that plagued the first few Alice Comedies will return.
Posted by Ryan at 4:45 PM