This short might have been the most illuminating of all for me personally. For a long time, I have heard animation fans whining about how animation should be confined to doing things that only animation could do, but I didn’t know what that meant. With computers and green screens, live action film and animation have never seemed closer. With the combination of viewing this and the other recent shorts, I now get it.

Animation can offer absurdist humor, like moments in this short when animals lose limbs, bodies and faces only to reconnect and resume their lives. Animation can show character development through what the cartoons do that a live actor would never do. I’ll give you an example. 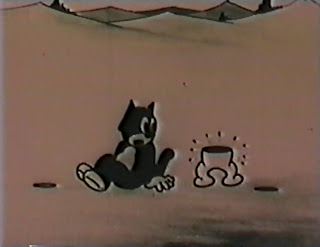 In this short, the film opens with Julius (no, they still have not put his name on the screen) chasing a rabbit. It’s a rabbit that could be similar to the later Oswald, but that’s a story for another day. Anyway, after some predictable chasing, Julius grabs the rabbit’s hind legs that are sticking out of its hole, pulling the rabbit in two. 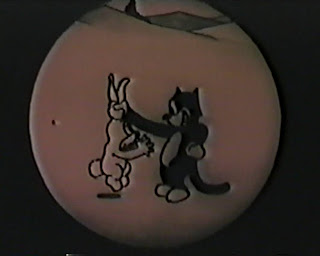 It’s a cute gag, followed by a better one. After the rabbit reconnects, she starts telling Julius a sob story about how there are a bunch of rabbit babies down in the hole that will be crying for their mama if Julius eats her. Meanwhile, two rabbits pop out of a nearby hole and start playing violin music. Of course, once Julius lets the rabbit go, she snickers and laughs at his naivete.

Could you do this in live action? Sure, but it would be patently ridiculous, and you would have to acknowledge it as such. In the course of a cartoon, though, it’s expected, and even foreshadows interaction you’ll see in later films with Bugs Bunny and Elmer Fudd from Warner Bros. 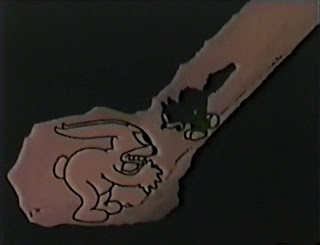 This short is really two in one, though, as it also features Alice going after a bunch of bears with her shotgun. It’s amazing how much of an afterthought Alice is in the film, but not when you consider the circumstances. See, this is Virginia Davis’ last film as Alice, due to the aggressive cost cutting of Margaret Winkler and the renegotiated contract with Disney. Winkler’s main condition of doing 18 more Alice films was to cut costs, and Disney, not wanting to cut the animation, decided to get a cheaper Alice.

As such, Virginia Davis delivers her last Alice performance here, and it’s more of the same from the last few films. Lots of standing around waving her arms. The real star of the second half of the film is the bear band, playing music and having a big party. Could this have been a forerunner to the Country Bear Jamboree? Huh? 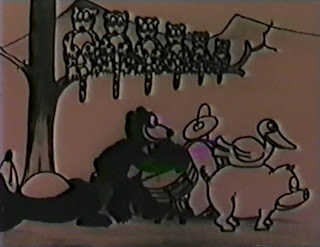 Bottom line, Alice shoots at the bear, knocking its arms, legs and head off in a funny bit, but the bear ends up chasing Alice and Julius. They dive into a barrel for cover, and the bear knocks a beehive into the barrel, which then rolls into the river. 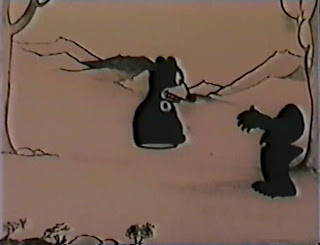 The quality here is very good, as it seems the less we see of Alice, the better the films get. Julius has become the main draw, and his bits are inspired, such as the interaction with the rabbit and climbing a tower of water to get to her. You can definitely see the comedic timing that would show up later in the Mickey Mouse and Donald Duck films.