If you remember, Alice Hunting In Africa was one of my first quandaries on this blog. The film was originally completed as one of the first Alice films, but Margaret Winkler complained so loudly about the quality of the animation that it had to be redone. After viewing the film, I have to agree with Ms. Winkler.

After watching the last two Alice Comedies, that Ub Iwerks contributed to, Alice Hunting In Africa is just plain bad. I don’t even want to contemplate what this film looked like before Walt and his crew went back and reworked things. As it is, it’s easily the worst of the Alice shorts, and not something you’d expect from Disney.

So, this film opens with Alice on the hunt in Africa, chasing a bear with a shotgun, while she’s riding some sort of horse/donkey combination. The mere sight of Alice with a shotgun is jarring, but throughout the film, Alice herself becomes animation, in places where the live action Alice would not show up. That steals the novelty of the concept, having a live action actor in the cartoon world. It is jarring in some places, and distracts from the film. 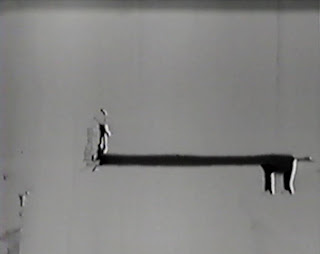 After the inventive use of the donkey’s neck as a way to get across a chasm, Alice continues chasing the bear, when suddenly we flip over to her friend the cat, riding an elephant. They switch their pursuit to a sleeping hippo, blasting a hole in his side with a cannonball launched from the elephant’s nose. 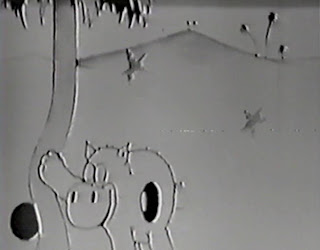 Those first couple of scenes are okay, if not great, but the following scenes degenerate into repeated instances of Alice or the cat chasing another character, in the patented running scenes that have been in so many of these films. Alice chases an animal for a while, then the animal chases her. The cat chases someone for a while, then the animal chases him. They should have called this “Alice Running in Africa,” for all the running that takes place. 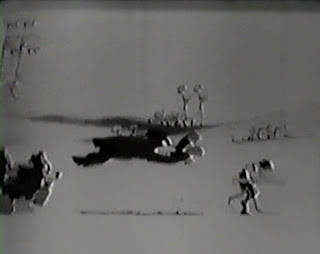 There is no cohesive story thread or any narrative for the audience to latch on to, just repeated scenes of animal chases and some silly gags. Some are funny, like the cat literally shooting the spots off a cheetah, then losing his “pants” when the cheetah’s mother strikes back, but nothing stands out. 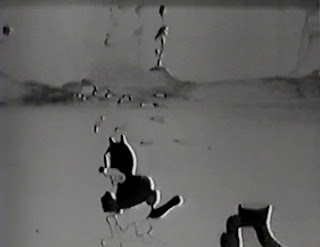 It’s films like this that really demonstrate how much Ub Iwerks contributed to the success of the studio. While Alice’s Day at Sea had some fantastic animation, none of the other non-Ub Alice films show the same quality and storytelling as the ones he worked on. The fact that Walt kept Ub when the rest of the crew left to produce Oswald for Universal may have been all he needed to make Mickey a success. If Alice Hunting in Africa is any indication, that’s definitely the case.
Posted by Ryan at 12:19 PM