I have to say, although this is not the most entertaining and inventive of the Alice shorts, Alice’s Egg Plant may be one of the most illuminating as far as Walt’s state of mind might go. There are definite inferences that can be drawn about the way Walt is approaching things now, a full year into running a cartoon studio, versus the way things were portrayed in previous films.

What do I mean? Well, this short opens with our friend Julius the cat coming up on the egg farm, and seeing no hens in the laying house, trying to roust the hens from their dormitory to produce more eggs. 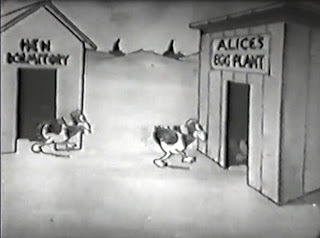 Julius spends the next few minutes of the film wandering the line, inspecting the eggs, cracking his tail as a whip, and generally harassing the hens. If you’ve been reading along, this is quite a departure from the previous mode of the Alice films. Think back to Alice and the Dog Catcher, where Alice skips out on piano lessons to go fishing, or Alice Gets in Dutch where the teacher is mercilessly mocked. All of a sudden, we’ve gone from mocking authority figures to turning the hero of the short into one. What’s changed?

Well, for starters, Walt Disney, rather than a young kid struggling to make his way in the world, is now a businessman, and one of the main proprietors of a studio. No longer is he the pal of the animators and just another of the boys, making films to avoid other jobs. He’s now the head man. That brings a whole new view into perspective.

But wait, it gets even more interesting. We see that Alice has an order for 5,000 eggs, and she calls her friend, Julius to fill the order. YES! Finally, Julius is named on screen! I’ve been waiting! Sorry, but it drove me nuts that everyone calls him Julius, but he had not been named in the actual shorts. 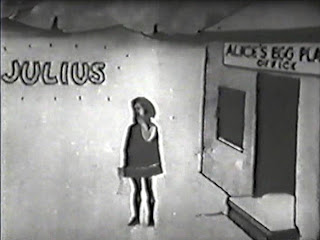 However, unbeknownst to Alice and Julius, a new hen has shown up. This new hen is from Moscow, and incites Alice’s hens to strike. Very interesting, right? 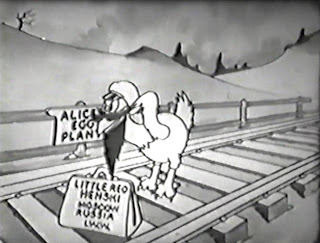 Here we are in 1925, years ahead of the cold war and the red scare, but in this cartoon, communism is the bad guy, and the capitalist trying to make a buck from the workers (the hens) is the hero. See any parallels with Walt trying to get his animators to work faster or harder? It’s possible. 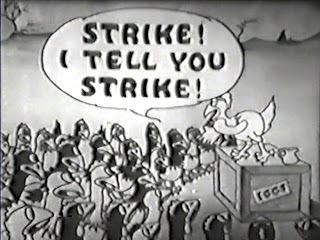 Alice and Julius are distraught, not knowing how they will finish the order, until Alice sees two roosters fighting. An idea is sparked, and they set up a prize fight, with the price of admission being one egg. Soon, they have collected their 5,000 eggs, just in time to drive off into the sunset. Unfortunately, just as they drive off, the eggs splatter off the back as we fade to black. 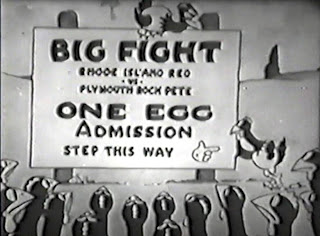 I have to say, the sudden shift in tone from Alice and Julius being the anti-authoritarian trouble makers to the overlords of a factory is jarring. But you have to imagine that Walt himself was going through a similar conversion. It is interesting to note though, that almost twenty years later, Walt would experience a strike of his own, and would insist that it was spurred by communist agitators. Did that idea blossom here? All in all, I think Alice’s Egg Plant is an essential window into the Disney Studio of 1925.
Posted by Ryan at 2:20 PM