So, with 1924 completed, and the first set of films under their contract completed, the Disney Brothers Studio was now ready to increase production of the Alice films in 1925. With Ub Iwerks in the fold, the quality of the shorts had increased, so Walt renegotiated the deal with Margaret Winkler. The original contract covered the first 12 Alice films, but the new contract would cover 18 more.

Among the last of the first batch of films is Alice Cans the Cannibals, released early in January of 1925. The films features Alice and Julius (everyone calls him this, but I have yet to see him called Julius in the films) driving their car into an ocean by mistake, and ending up on an island of cannibals.

The film is very fun, which can’t be said about every other Alice film. This one really makes use of animation, as you see Walt and his staff losing interest in the live action aspect, no longer bothering with a framing sequence in the last few films. Honestly, Alice is mainly window dressing in this film, with Julius carrying the action. 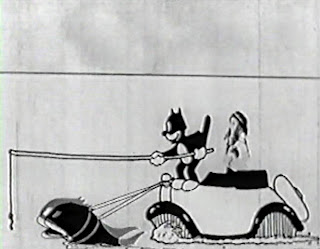 It begins with Julius driving the car over a cliff, and he and Alice stranded at sea. They manage to hook up a neat contraption with a fish on a leash driving them, in a bit of clever animation. 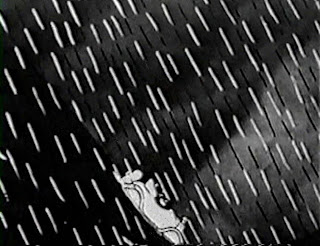 After that, a storm strikes, with scenes reminiscent of Alice’s Day at Sea. The dark waves batter the car throughout, with amazing rain effects, and even at some point a platoon of monkeys falling from the sky. Not sure why, but it is a nice bit of animation with some cool effects. 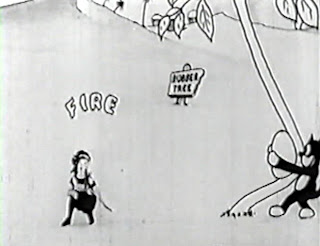 Ending up the next morning in the ocean near an island, Julius leads their escape from a group of swordfish by hoisting a “balloon tire” over his head and Alice grabs his tail as they float to the island. Almost immediately, they run into the cannibals, who begin chasing them. 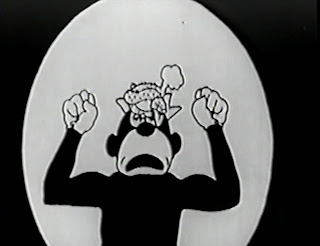 That part is to be expected, as most of these films involve Alice and/or Julius being chased, but this one makes better use of the background. Alice and Julius run up a cliff, climbing up the spears that the cannibals threw as if they were a ladder. Then, as the cannibals close in, Alice manages to throw a spear with a rope through the nose rings of the cannibals, with the spear landing in a hippo’s rear end. The hippo drags the cannibals away, giving our heroes a happy ending. 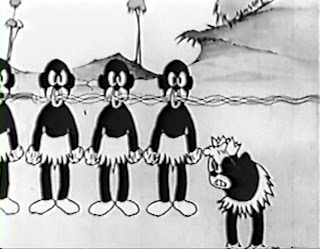 This is one of the shorts where you can really see improvement in the storytelling and animation. Instead of relying on the same tired gags over and over, there is real invention here. The storm sequence, the modified chases and the balloon tire are all new ideas, and they are executed well. If Walt used this as an example of what his studio could do when renegotiating with Winkler, he would have been in great shape.
Posted by Ryan at 2:18 PM