Three more to go, then it’s on with the shorts… 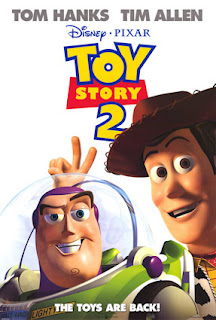 Okay, it’s a PIXAR film, but I addressed that in my Cars review. And Woody and Buzz are now part of the Disney canon now, so I feel justified in placing this one on the list.

Simply put, this is a magnificent film. I have to say, as a filmmaker, John Lasseter has my full and complete trust. His instincts have proven to be great, not just on the Toy Story films and Cars, but as a supervisor on Bolt, or in the other PIXAR films. Lasseter understands story better than just about anyone working in film today. That’s why it’s so heartening to me to see him more involved in the parks and animation, both areas where Disney needs better storytelling.

The emotional core of Toy Story 2 is the story of kids growing up, but there’s so much more. Thematically, this is almost a sequel to Peter Pan moreso than the first film. If Peter Pan was about the struggles of remaining young forever, Toy Story 2 is about the struggle of growing up, and what you have to leave behind if you do. Ultimately, both films present a similar message – that growing up does not mean you have to lose your youthful energy and wonderment.

The story of the film, with Woody being stolen to be part of a major auction for collectible toys, is a direct poke at the collector mentality in the toy/card/comics community, which I love. As a long time comic book reader, the people who buy comics just to hoard them away and never read them drive me crazy. Similar to the message of this film, I feel that comics and toys are there to be enjoyed, not traded like commodities. That’s part of why I love this film so much. 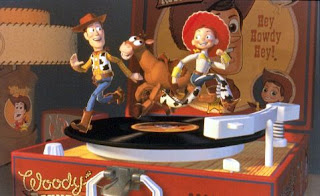 But it’s more than that. The fact that the characters develop, grow and evolve from the first film is amazing. Most sequels these days take the successful catch phrases and formulas from the first and simply try to layer a more complicated story on top of that – see Pirates of the Caribbean: Dead Man’s Chest. But Toy Story 2 doesn’t take that road. Instead, we see a natural evolution of the characters, with Buzz growing more into his role in Andy’s room, Woody becoming more friendly and coming to grips with his insecurity, and even characters like Rex and Hamm showing new facets to their personality. 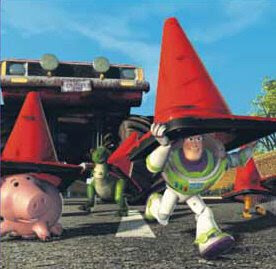 The animation here is also superb. If you ever view this film back to back with its predecessor, you’ll be astounded. I don’t think any other company is making movies with this quality of animation. I saw the latest Madagascar film with my children over the weekend, and was astounded at the animation, and the seeming lack of growth from the first film. PIXAR is not like that. With every film, the quality improves, and that’s especially true here. 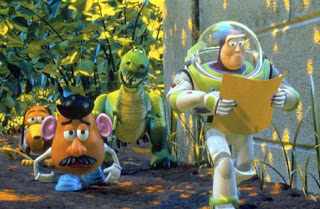 The bottom line is that this is a funny, touching and entertaining movie. Too often these days, films fail to accomplish all three of those things, because it’s more difficult to be well rounded than a one note joke. But Toy Story 2 aims higher, and succeeds on a higher level than any of the other PIXAR films, and in fact better than any other Disney hand drawn film, at least in my opinion. This is the kind of film that I feel Walt would be making today, and that’s why it’s one of my favorites.
Posted by Ryan at 3:44 PM