Alright, we’re ready to finish off the year of 1924 with the final short released by Disney that year – Alice the Piper. It’s hard to say that this one is as good as the last few Iwerks influenced shorts, but it’s not too bad, and a fitting way to end the first year of Alice Comedies. 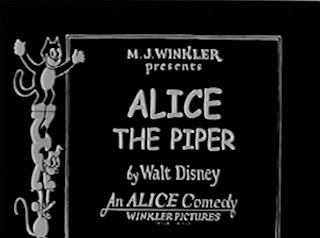 The story opens with rats having invaded the town of Hamlin, taking over all the town’s areas, grabbing cheese, terrorizing sausages, and tormenting the town’s king. The rats appear in his bed, steal his blanket and trap him in a bear trap, just to name a few of their dirty deeds. 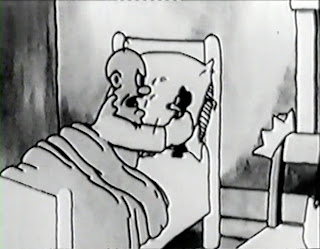 Fed up with the torment, the king posts a reward sign, offering $5.00 to anyone who can rid the kingdom of the rats. The mischievous rats, meanwhile, change the sign to read $5,000 reward, meaning that hilarity will most assuredly ensue. 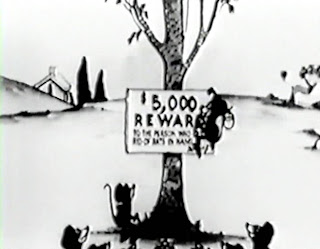 Into this situation comes our adventurers, Alice and Julius the cat. And no, he still has not been named in the cartoons as of yet. They are “starving” according to the card before their arrival, and the thought of $5,000 of milk or ice cream drives them to action.

Their first thought is just like the fairy tale, to play music and lead the rats to the river to drown. Although the rats enjoy the music, they are not following them to the river, mainly because of the large sign next to Julius that says “To The River.” Apparently, these rats can read. Who knew? 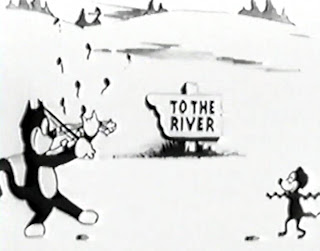 That plan not working, Alice and Julius instead see a nearby giant vacuum cleaner, and suck all the rats up with that instead. Convenient, huh? The king emerges from his hut, which seems to be the only building in Hamlin, and gives Julius the $5.00. This is where my copy ends, but I have heard that in the original film, Alice and Julius reverse the vacuum and let the rats back onto the populace. 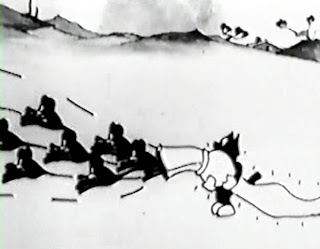 Don’t get me wrong, the animation in this short is top notch, and it shows the animators still being inventive and using some fun bits. The characters are all the same, though, as the king is familiar from the Laugh-O-Grams, the rats are the same mice (very Mickey-esque) as in earlier films, and of course Julius is the same.

The main thing I dislike about this film is the deus ex machine of the vacuum cleaner sitting only a few feet away from the door of the king’s hut. I mean, it’s just lazy, isn’t it? The guy could go outside to post a reward sign when no one else is anywhere nearby, but he couldn’t notice this giant vacuum cleaner? This doesn’t square up with the inventive notions of the bears making beer in Alice and the Three Bears and other cool twists that the Disney animators did on some of the other fairy tales. It’s too easy and wraps up the action too quickly for my tastes. It’s bad storytelling, which has been rare so far in these films.